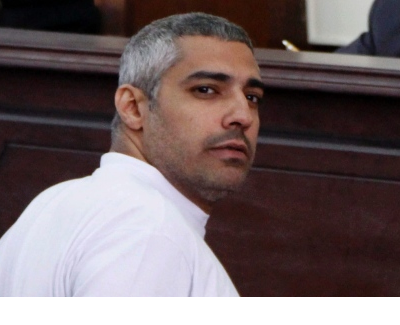 Montreal, June 23, 2014 — Canadians for Justice and Peace in the Middle East (CJPME)—a grassroots citizens’ group— believes the Canadian government’s indifference directly contributed to today’s conviction and sentencing of Canadian journalist Mohamed Fahmy. An Egyptian court convicted Fahmy and two other Aljazeera journalists on charges of aiding terrorism and falsifying news. Fahmy and Australian journalist Peter Greste were sentenced to seven years in prison, and Egyptian producer Baher Mohamed to ten years. Amnesty International observers of the trial commented that the prosecution failed to produce a single shred of solid evidence for either charge. As noted by Amnesty International, Fahmy and the other Al Jazeera crew members were simply doing their jobs as a news crew.

Although Canadian consular officials supported Fahmy, the Canadian government’s reaction to Fahmy’s jailing in December was lackadaisical. “At no point did Prime Minister Harper or Foreign Minister John Baird ever call unequivocally for Mohamed Fahmy’s release, as it ought to have, given Fahmy’s work as a professional journalist. To make matters worse, Canada increased trade with Egypt when it ought to have been threatening to suspend it,” says CJPME President Thomas Woodley. While Fahmy and other members of the Al Jazeera English news crew were in their fourth month in jail, John Baird led a trade mission to Egypt.

CJPME is concerned that the government’s lackadaisical response to Fahmy’s jailing also signals to the hundreds of thousands of Canadians with dual citizenship that this government will not go to bat for them if they face persecution while working abroad. Fahmy has both Canadian and Egyptian citizenship. CJPME believes that all Canadians, regardless of their origins, should be able to count on their government standing up for their fundamental rights when they are abroad.

CJPME also urges the Canadian government to speak up about the mass death sentences being imposed on hundreds of Egyptian citizens. CJPME notes that on June 21, a court in Minya confirmed 183 of the 683 provisional death sentences imposed after a lightning trial that severely violated the defendants’ due process rights.

CJPME calls on the Canadian government to suspend all preferential trade agreements with Egypt until Fahmy and the other Al Jazeera journalists are released and Egypt’s human rights record improves. CJPME also urges MPs of all stripes to critically examine the government’s Middle East policy and to develop principled criteria for Canada’s economic and political engagement with the Middle East. .