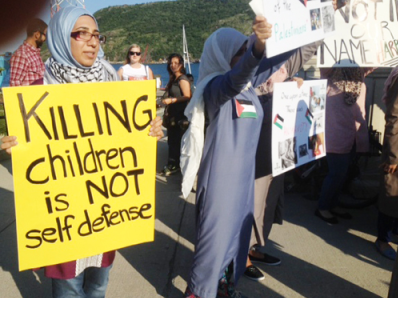 Montreal, July 25, 2014  — Yesterday, Canadians for Justice and Peace in the Middle East (CJPME) issued a document (http://cjpme.nationbuilder.com/israels_arguments) called How to respond to Israel’s pet arguments. CJPME hopes to help concerned Canadians better understand the context of the Israeli assault on Gaza and respond to common arguments used by proponents of Israel to prolong the assault. CJPME hopes that individuals in the public sphere will consider the information provided and regard such arguments more critically in the future.

The main arguments being addressed in CJPME’s document are the following:

In reviewing the Canadian media coverage of the conflict in the past two weeks, arguments similar to the above were repeatedly used to justify Israel’s military actions, and to excuse Palestinian civilian deaths. “It is distressing to observe the way in which war and civilian deaths are so easily rationalized, and how people so quickly ape these flimsy ‘sound bytes,’” says CJPME President, Thomas Woodley. “Most of the arguments are either unsubstantiated by the facts, or unsupported by international law.”

CJPME calls on Canadians and MPs of all political stripes to protest Israel’s assault on Gaza, and to push for a viable ceasefire and resumption of peace talks. CJPME believes that only an end to Israel’s occupation of the Palestinian territories and its illegal “settlement enterprise” will bring peace. In 17 days of conflict, more than 800 Palestinians (at least 80% of them are civilians and children) have been killed and more than 4600 injured. 35 Israelis have also been killed (33 soldiers and 2 civilians).