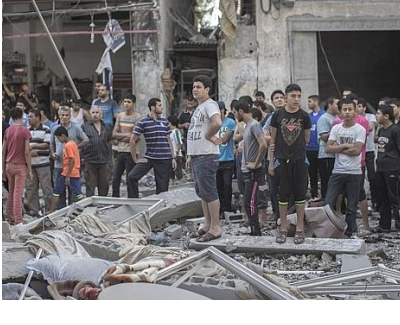 Montreal, August 27, 2014 — Canadians for Justice and Peace in the Middle East (CJPME) welcomes the announcement of a ceasefire between Hamas and Israel. The ceasefire was slated to begin yesterday. It was brokered by Egypt and Qatar. According to Al Jazeera news network, the deal includes an immediate easing of Israel's blockage of crossings into Gaza. The Rafah crossing between Egypt and Gaza will also be opened. CBC reports that under the deal, aid and reconstruction materials will be allowed in, and Palestinians will be allowed to fish up to six nautical miles offshore, up from three. Discussions on the creation of a seaport and airport will take place in a month, when indirect talks between Israel and Palestinians will resume.

“We hope the ceasefire will hold. However, we remind Canadians and their MPs that Israel’s blockade of Gaza violated international law, which prohibits collective punishment, particularly of the civilian population. Thus loosening it is hardly a major concession on Israel’s part,” commented CJPME President Thomas Woodley.

CJPME notes that in Gaza, at least 2,138 people, 75 percent of them civilians (according to the UN), including over 490 children, have been killed by Israeli military since this round of violence erupted July 8. On the Israeli side, 64 soldiers and 4 civilians were killed. CJPME points out that the high death toll among Palestinian civilians was the direct and predictable result of the Israeli government’s decision to use disproportionate force and to make virtually no distinction between civilians and fighters during its aerial bombardments and land invasion.

CJPME urges Canadian MPs of all stripes to press Israel to permanently halt its violations of international law and end the military occupation of the Palestinian territories, including Gaza, controlled by Israel since 1967. CJPME calls on Canadian MPs to support investigation into alleged war crimes committed by all parties to the recent conflict whether by a UN inquiry, or by the International Criminal Court.

The whole or parts of this press release can be reproduced without permission.
Israel - War on Gaza 2014 Israel - Blockade of Gaza CJPME
Do you like this post?
Tweet