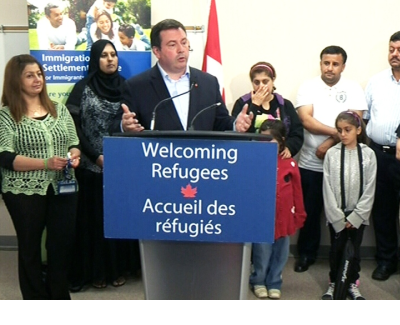 Montreal, December 10, 2014  — CJPME joins with other Canadian and international groups in lamenting Canada’s miserly approach to Syrian refugees.  These admonishments come as the UN High Commission on Refugees (UNHCR) made a plea yesterday in Geneva for wealthy countries to increase their refugee resettlement commitments.  While Canada has confirmed its willingness to resettle Syrian refugees, it made no new announcements to increase the number of Syrian refugees it would resettle.  With its promise to accept a mere 1300 Syrians – out of which only 457 have made their way to Canada – CJPME, Amnesty International Canada and others have condemned Canada for its ungenerous and insensitive approach to Syrian refugees.

The rebukes have been harsh. “There's every reason in the world that Canada should be leading the charge in responding to this refugee crisis,” said Alex Neve, secretary general of Amnesty International Canada.  For CJPME, President Thomas Woodley asserted that, “Canada has not shown the compassion or the leadership that the current crisis in Syria should warrant.  The humanitarian response of the current government pales in comparison to what Canada did during previous international humanitarian crises.”

Last month, through freedom of information requests, Canadian media determined that Canada was falling far short of its 2013 commitment to resettle 1300 Syrian refugees by the end of this year.  This, despite claims earlier in the year by minister Alexander that many refugees were being processed under the commitment.  In documents released by the media last month, it was made clear that officials at Immigration Canada had warned the minister that Canada was far from meeting its target.  Officials attributed this lacklustre response to the fact that the government had offloaded 85% of the resettlement commitment to private sponsors.  The Harper government has never explained why the government limited its financial responsibility to such a small portion of the commitment.

Other Canadian leaders on the issue speculated whether the Harper government was reluctant to welcome Syrian refugees because such a high percentage of them are Muslim.  Faisal Alazem, a spokesperson for the Syrian Canadian Council speculated, saying “We hope that religion is not a factor but unfortunately it is something that is being talked about in the [Syrian-Canadian] community.”

Around 3.8 million refugees from Syria have fled to neighbouring countries, the majority to Lebanon, Jordan, and Turkey.  Amnesty International reports that only 1.7 percent have been offered sanctuary by countries from the rest of the world.