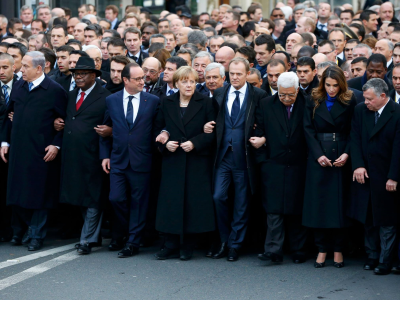 Montreal, 14 January 2015 – Canadians for Justice and Peace in the Middle East (CJPME) notes the irony in the presence of certain world leaders marching to uphold human rights in Paris. The million-person march on the 11 of January 2014 took place to protest the Charlie Hebdo shooting in Paris where 17 people were killed. Over 50 world leaders linked arm-in-arm led the symbolic march to denounce the shooting which represented an attack on freedom of speech. Ironically, the countries of many world leaders linking arms in Paris also suppress freedom of speech.

“Free expression, both for individuals and the media, is an essential ingredient for free and open societies,” asserted Thomas Woodley, President of CJPME. In relation to abuses of freedom of speech and press, CJPME points out that the countries of the above-mentioned leaders have been known to incarcerate journalists for years, or to torture and kill journalists due to their published content. For example, Prime Minister Netanyahu’s forces have killed 7 journalists in Gaza over the past year while Palestinian President Abbas, had several journalists jailed for insulting him in 2013. In a very high-profile case, Egypt currently jails three international Aljazeera English journalists, including one from Canada.  RWB places Egypt at 159th out of 180 countries in their press freedom index.