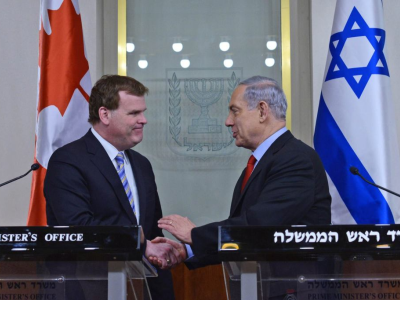 Montreal, January 21, 2015 – Canadian Foreign Minister John Baird’s visit to Israel and the Occupied Palestinian Territories this week demonstrated just how badly Canada’s image has been tarnished in the Middle East. Upon arriving in the West Bank, Baird’s convoy was pelted with eggs and shoes by Palestinians dissatisfied with the Canadian government’s stance on the situation in the region. While Canada managed to remain somewhat neutral with regard to the Arab-Israeli conflict under previous governments, recent remarks by Baird illustrate just how far Canada has come in its fawning support for Israel and its disregard for legitimate Palestinian concerns.

Canada’s bias towards Israel is evident given John Baird’s statements regarding both Israel and Palestine. Upon meeting with Israeli Prime Minister Benjamin Netanyahu, Baird declared, “Canada doesn’t stand behind Israel; we stand shoulder-to-shoulder with it.” Baird’s obsequious attitude towards Israel stood in stark contrast to his statements regarding Palestine’s recent membership at the International Criminal Court (ICC). Rather than applauding the Palestinians’ decision to submit itself to the authority of the Court, The Foreign Minister described Palestine’s ascension to the Rome Statute as a “huge mistake,” even going so far as to say that the Palestinians had crossed “a red line.” Many have noted that Canada played a leading role in the creation of the ICC during the 1990s, making its condemnation of Palestine’s recent membership even more surprising.

Canadians for Justice and Peace in the Middle East (CJPME) disagrees with Canada’s uncritical support for Israel. While Canada and Israel may have friendly relations, CJPME believes the Canadian government should hold Israel to the same standards as any other state, rather than showering it with unquestioning support and praise. “As a human rights organization, we believe that all parties involved in a conflict should be held to the same standard,” CJPME President Thomas Woodley said today. “No side is blameless in this conflict, so Canada needlessly squanders its diplomatic capital when it blatantly favours one side over the other.”

Palestine’s membership at the ICC will become effective April 1 of this year, with many expecting the Palestinian Authority (PA) to pursue Israel for human rights abuses during its war in Gaza last summer. Although Canada opposes the move, it is unclear whether such opposition will affect the ICC’s decision to try the PA’s case against Israel.