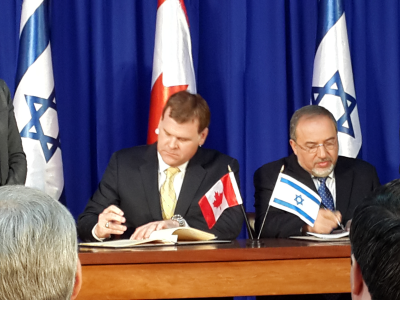 Montreal, February 4, 2015  — During his visit to the Middle East last month, Canadian Foreign Minister John Baird signed a number of agreements with the State of Israel, among them a Memorandum of Understanding (MOU) regarding diplomatic cooperation. While the memorandum covers a variety of topics, including advocating the resolution of the Israeli-Palestinian conflict, the document also touches on limiting criticism of Israel, which it identifies as “the new face of anti-Semitism.” While the MOU is vague, it has the potential of being interpreted very broadly.  As such, Canadians for Justice and Peace in the Middle East (CJPME) criticizes the MOU as having the potential to dangerously curtail public debate.

CJPME fears the potential repercussions of this recent MOU given its many subjective elements. It should be noted that CJPME strongly opposes anti-Semitism in all its forms and respects the legitimacy of the State of Israel. Nevertheless, CJPME believes that Israel should be held to the same standard as all other sovereign states. As such, the Israeli government should be critiqued when it violates human rights or fails to respect its international obligations under international law.

While some have political reasons for conflating criticism of Israel with true anti-Semitism, CJPME vigorously disagrees with this notion. According to CJPME President Thomas Woodley, “We are a Canadian-based organization but this is no way prevents us from being critical of various Canadian policies, be it at home or abroad. The same is true for Israel – they must be held to the same human rights standard as all other nations.”

The MOU further condemns the Boycott, Divestment, and Sanctions (BDS) movement targeting Israel for its alleged “efforts to single out the State of Israel for criticism and isolate [Israel] internationally.” Palestinian civil society launched the BDS movement in 2006, and calls on the international community to boycott Israel until it submits to a number of demands under international law. CJPME supports BDS as a democratic and non-violent means of imposing economic pressure on Israel to respect international law.  CJPME points out that the Canadian government currently sanctions 22 different governments related to human rights issues, but has never sanctioned Israel.

The entire Memorandum of Understanding is available to the public here: http://www.international.gc.ca/media/aff/news-communiques/2015/01/18b-3.aspx?lang=eng