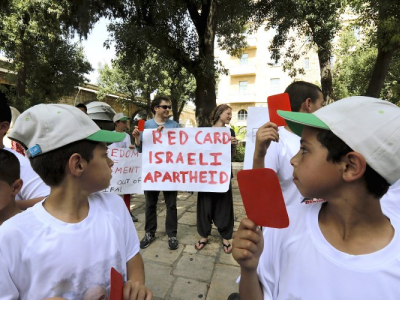 Montreal, May 22, 2015 — Canadians for Justice and Peace in the Middle East (CJPME) urges the Canadian Soccer Association (CSA) to support FIFA sanctions against Israel. On May 29, 2015, the 209 member-states of the Fédération Internationale de Football Association (FIFA) will vote on a resolution on whether to have Israel suspended from FIFA.  Israel stands accused of gross violations of FIFA’s code of conduct against Palestinian soccer players for harassing, beating, torturing, shooting, and imprisoning them. For the resolution to pass, a 75 percent vote majority is required, although a simple majority would still result in Israel being censured.

The call to suspend Israel comes from the Palestine Football Association (PFA), a FIFA member. Palestinian soccer players face ongoing discrimination from Israeli bureaucrats and security forces in the West Bank and Gaza in violation of FIFA’ code of conduct. The Palestinians’ complaint against Israel cites a) Israeli restrictions on the travel of Palestinian players, b) Israeli sabotage of Palestinian soccer facilities, and c) Israeli limitations on the transfer of equipment to the West Bank.  Finally, d), the Palestinians point out that five teams in the Israeli football league are based in illegal settlements in the West Bank, also in clear contravention of FIFA rules.

“Just having a motion from the soccer world’s governing body is deeply embarrassing for Israel,” asserted Thomas Woodley, President of CJPME. CJPME hopes that the motion will encourage Israel to respect the human rights of Palestinians.  265 million people play soccer worldwide through their country’s respective associations, according to FIFA. As a result, the popularity and importance of this sport is undeniable, and Israel’s suspension would reverberate in the soccer world and beyond. “A suspension might also encourage other international sporting bodies to take measures to sanction Israel’s violations of Palestinian human rights,” continues Woodley.

CJPME points out that Israel’s treatment and discrimination of Palestinian players are not only illegal under FIFA’s code of conduct, but also unethical and mean-spirited. “For many Palestinians, soccer is hope, a way of escaping the stress of checkpoints, airstrikes, and military occupation,” observes Woodley. “If the world allows this cruel situation to continue, Israel’s actions put a stain on ‘the beautiful game’ and on FIFA itself. By voting in favour of the motion suspending Israel from FIFA, the CSA will support international justice, sportsmanship and fair play.”