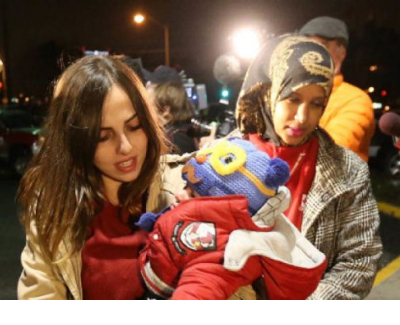 Montreal, Dec. 11, 2015 – Canadians for Justice and Peace in the Middle East (CJPME) joins with other Canadians in welcoming the first group of refugees from Syria under the Liberal government’s new policy.  In a symbolic inauguration of the government’s new Syrian refugee initiative, 163 refugees arrived in Toronto late Thursday night.  CJPME had been critical for years of the previous government’s parsimonious and closed-minded attitude toward Syrian refugees.  As such, the approach of the new Liberal government is refreshing, and CJPME views the first wave of Syrian refugees as the launch an exciting new era for Canada.

Nevertheless, CJPME points out that 80 percent of the refugees expected to arrive in Canada in the coming months are expected to be privately-sponsored.  Privately-sponsored refugees depend on Canadian residents to front the cost-of-living funds for the refugees for the first year – a sum that is often more than $25,000 per family.  CJPME points out that these costs are prohibitively expensive for many potential Canadian donors, and create a certain bias in the selection process – one that does not favour the most vulnerable of the refugees.

“We are thrilled that these refugees have arrived,” exclaimed Thomas Woodley, President of CJPME.  “This is an exciting time for Canada, and as Canadians we can be proud of this new phase in our history.”  CJPME eagerly anticipates the day in the coming months when the refugee families that it has co-sponsored will also arrive in Canada.  “Nevertheless,” continued Woodley, “Canadians should reasonably expect their government to make a greater investment in ‘government-sponsored’ refugees, to ensure that the most vulnerable of the Syrian refugees have a chance for a life in Canada.”

CJPME believes that private refugee sponsorships provide the most effective support framework for refugees once they arrive in Canada.  Nevertheless, CJPME asks the Trudeau government to promote programs – e.g. the Blended Visa Office-Referred Program – which encourage private sponsorships by providing a government subsidy or ‘matching fund’ for sponsors who cannot front the entirety of the hefty sponsorship fees.  Such programs enable greater sponsorship, and favour the refugee families considered the most vulnerable in Syria.