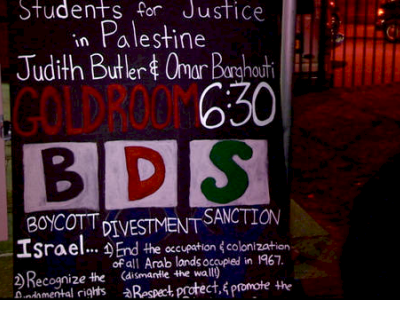 Montreal, May 24, 2016 - On May 19, the Ontario Legislature blocked the passage of Bill 202 which would have imposed sweeping economic sanctions on Canadian entities and individuals who support BDS.  A group of Canadian organizations has come to together to applaud the blockage of this bill in a joint statement.  These organizations include:

The Boycott, Divestment and Sanctions (BDS) movement, targeting Israel for economic pressure, is supported by literally hundreds of Canadian groups[1] – the above organizations included.  The organizations which support it do so because it is a democratic, non-violent strategy to encourage the state of Israel to respect international law and the human rights of Palestinians.

Many of the MPs who voted against the bill did so out of support for free expression, regardless of how they felt about the BDS movement.  Support for free expression is admirable, and should have motivated all 107 of Ontario’s MPPs to vote against the bill.  Had Bill 202 passed, for example, a provincial employee supporting BDS would lose her job.

Both the Ontario Civil Liberties Association and the British Columbia Civil Liberties Association (BCCLA) issued statements condemning Bill 202.  The BCCLA stated, “To be clear, governmental bodies can generally choose their contractors.  What we say they can’t do is enshrine political discrimination in law, chill rights to public participation, sanction political witch hunts and threaten and punish individuals for their political views.  The claim that this bill will not affect rights to free expression is simply ridiculous.  It is designed to do that very thing. It is shocking that the government of Ontario is considering such a bill.  We say it is almost certainly not constitutional, and a very serious curtailing of democratic rights.” [2]

Ontario’s Legislature should also be aware that Amnesty International – the world’s premier human rights organization – slammed an anti-BDS motion that passed in Federal Parliament on February 22.  Amnesty likewise censured the motion on the basis of free speech, saying that the motion could “undermine the right of individuals to exercise their free expression right to promote the BDS movement.” [3]

Beyond the question of free expression, anti-BDS bills should be rejected because BDS is good policy: for civil society, for the Canadian government and for international peace.  The objectives of the BDS movement align wholly with international law and Canada’s own foreign policy objectives on Palestine-Israel as described below:

The first stated objective of the BDS movement is “Ending [Israel’s] occupation and colonization of all Arab lands and dismantling the Wall.” [4]  This aligns closely with the position on Canada’s Global Affairs Website on the Israeli-Palestinian conflict where it says, for example:   “Canada does not recognize permanent Israeli control over territories occupied in 1967 (the Golan Heights, the West Bank, East Jerusalem and the Gaza Strip). The Fourth Geneva Convention applies in the occupied territories and establishes Israel's obligations as an occupying power, in particular with respect to the humane treatment of the inhabitants of the occupied territories.” [5]  Also, on the questions of Israel’s wall, “Canada opposes Israel's construction of the barrier inside the West Bank and East Jerusalem which are occupied territories. This construction is contrary to international law under the Fourth Geneva Convention. Canada not only opposes Israel's construction of a barrier extending into the occupied territories, but also expropriations and the demolition of houses and economic infrastructure carried out for this purpose.” [6]

The second stated objective of the BDS movement is “Recognizing the fundamental rights of the Arab-Palestinian citizens of Israel to full equality.” [7]  No less than 20% of Israel’s citizens are Palestinian Arab, yet they live as second class citizens. [8]  Canada’s Global Affairs Website – like BDS – makes a commitment to address human rights and civil rights abuses around the world: “Canada takes principled positions on important issues to ensure that freedom, democracy, human rights and the rule of law, values that define this country, are enjoyed around the world.” [9]

The third stated objective of the BDS movement is “Respecting, protecting and promoting the rights of Palestinian refugees to return to their homes and properties as stipulated in UN resolution 194.” [10]  In 1948, Canada voted in support of Resolution 194 at the UN.   Canada’s continued support for Resolution 194 is reflected on Canada’s Global Affairs Website: “Canada believes that a just solution to the Palestinian refugee issue is central to a settlement of the Israeli-Palestinian conflict, as called for in United Nations General Assembly resolution 194 (1948) and United Nations Security Council resolution 242. … This solution should respect the rights of the refugees, in accordance with international law.” [11]

The signing organizations represent hundreds of thousands of Canadians, including many community-based grassroots groups in Ontario.  Should Ontario legislators or media have any questions, they should contact Thomas Woodley at Canadians for Justice and Peace in the Middle East at 438-380-5410.


[1] “List of Canadian organizations applying economic pressure on Israel,” Canadians for Justice and Peace in the Middle East, http://www.cjpme.org/list_of_canadian_organizations accessed May 10, 2016

[6] Ibid., “Canadian Policy on Key Issues in the Israeli-Palestinian Conflict”

[11] Ibid., “Canadian Policy on Key Issues in the Israeli-Palestinian Conflict”