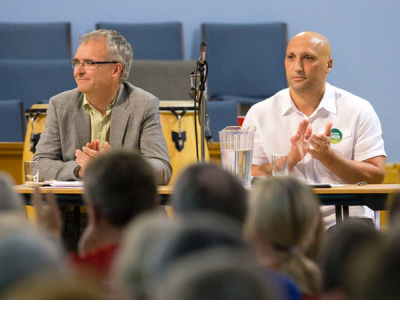 Montreal, November 11, 2016  — Canadians for Justice and Peace in the Middle East (CJPME) applauds the proposed Green Party of Canada (GPC) resolution on Israel-Palestine.  The proposed resolution was emailed to party members Wednesday, and was a result of collaborative work between the GPC shadow cabinet and other party human rights activists.  “We are pleased to see a fair-minded and inclusive resolution which addresses the concerns of both Israelis and Palestinians, and speaks to the long-standing human rights issues in the region,” declared Thomas Woodley, President of CJPME.

Importantly, the resolution represents a “compromise” position between GPC leader Elizabeth May and other important voices in the party who wanted a clear human rights-oriented position.  In the email to party members, both May and Dimitri Lascaris, former GPC shadow cabinet justice critic, expressed their support for the resolution.  While the new resolution does not specifically endorse the international Boycott, Divestment and Sanctions (BDS) movement, it nevertheless expresses support for “economic measures such as government sanctions, consumer boycotts, institutional divestment, economic sanctions and arms embargoes.”

“By putting forth a clear statement on a resolution of the Israel-Palestine conflict based on human rights and international law, the GPC opens its doors to the hundreds of thousands of Canadians who sincerely desire a just peace in Israel-Palestine,” said Woodley.  CJPME acknowledges the political leadership reflected in this proposed resolution, and encourages Canada’s other federal political parties to follow the GPC’s example.