CJPME Saddened and Disgusted by Attack on Quebec City Mosque 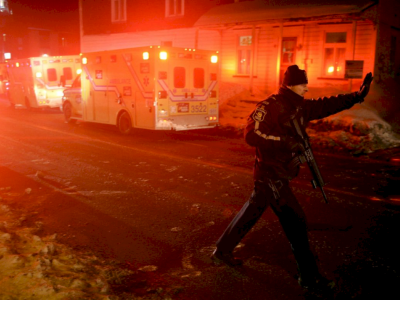 Montreal, January 30, 2017  — Canadians for Justice and Peace in the Middle East (CJPME) is saddened and disgusted by Sunday night’s deadly attack on a Quebec City mosque that killed six and injured eight.  CJPME condemns the attack, and echoes suspicions that this attack was a terrorist incident motivated by hatred towards Muslims.  “The climate towards Muslims in Quebec has been increasingly hostile in recent years,” explained Thomas Woodley, president of CJPME.  “Quebec and national politicians have often fanned the flames of animosity and prejudice towards Muslims, and attacks like these are the tragic and inevitable result.”

CJPME points out that Quebec’s far-right movements have frequently tended to focus their hate on Muslims.  For example, a growing group in Quebec known as “La Meute” (“The Wolf Pack”) works a number of anti-Muslim initiatives: boycotts of halal products; petitions against multiculturalism; and fear-mongering articles against Quebec Muslims.

CJPME also calls attention to a trend of prejudice against Muslims in recent years in Quebec.  The Parti Quebecois proposed a law in 2013 known as the Quebec “Charter of Values” which had a deep anti-Muslim focus.  This bill, suggesting the banning of religious symbols – such as the hijab – in public institutions, exacerbated anti-Muslim currents in the province.  There have also been many localized incidents of Islamophobia documented in Quebec in recent years: the vandalism of mosques, the harassment of Muslims in public, the discrimination against Muslim Quebecers by public servants.  Studies have also shown that there is discrimination in the Quebec labour force against immigrants from Muslim majority countries.

Canadian politicians at the national level have also fed anti-Muslim sentiments in recent years.  The Harper government, for example, maintained an anti-Muslim immigration policy vis-à-vis Syria.  The same government also sought to impose restrictions on Muslims in terms of their participation in citizenship ceremonies.  In an initiative viewed as Islamophobic by many, Conservative leadership candidate Kellie Leitch has talked about instituting a law to screen “immigrants, refugees, and visitors” for “Canadian values.” All such gestures only encourage right-wing extremists to target Canada's vulnerable Muslim community.