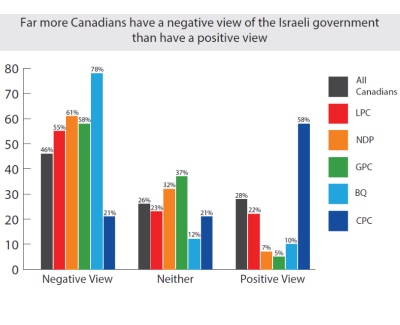 Montreal, Ottawa, February 16, 2017 - A new public opinion survey on the Israel/Palestinian conflict reveals a dramatic disconnect between the policies of the Canadian government and public opinion. The survey, conducted by EKOS and Associates, raises serious questions about Canadian policies and the assumptions that underlie them.

"Canadian foreign policy should reflect Canadian values and attitudes," said Thomas Woodley of Canadian for Justice and Peace in the Middle East (CJPME), a survey sponsor. "But our survey reveals that Canadians are far more critical of Israel than Canada's government, which those surveyed saw as pro-Israel, rather than pro-Palestinian."

Of those who expressed an opinion on how they view the Israeli government, 46% said "very negative" or "somewhat negative," while only 28% said "very positive" or "somewhat positive."  Conversely nearly four times as many respondents (61%) think the Canadian government "has generally been more pro-Israel” than think it is “pro-Palestinian” (16%).

The survey reveals a dramatic difference between Conservative Party supporters and those of all other parties in Parliament. Fully 58% of Conservatives have a 'positive view' of the Israeli government while the average for the other four parties is just 11%.

Diana Ralph of Independent Jewish Voices, added "We were encouraged to see that almost all Canadians (91%) who expressed an opinion said that criticism of Israeli government policies is like criticism of any other country, and is not necessarily anti-Semitic. Jewish respondents also shared this view.”

The survey was completed between January 25 and February 2, 2017, with a random sample of 1,000 Canadian adults aged 18 and over. The margin of error associated with the in-scope sample is plus or minus 3.1 percentage points, 19 times out of 20.

A full report and all survey results can be accessed at http://survey.cjpme.org, http://ijvcanada.org, or http://dimitrilascaris.org.