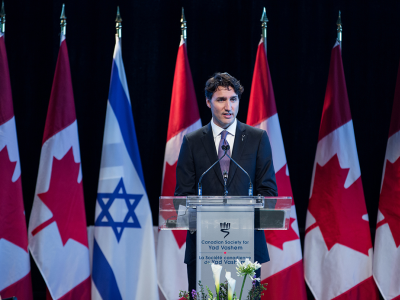 Montreal, February 17, 2017  — Canadians for Justice and Peace in the Middle East (CJPME) and partners released new survey results yesterday which indicate sharp disagreement between Canadians’ attitudes and government policy on Israel.  The survey, conducted by EKOS and Associates, suggests that Canadian government policy on Israel is not representative of most Canadians’ views.

All survey results, a summary report, and charts can be accessed at http://survey.cjpme.org.

“Both Harper and Trudeau have maintained policies which are highly supportive of Israel, but are not very reflective of how Canadians view that country,” announced Thomas Woodley, president of CJPME.  Of those who expressed an opinion, 46 percent of respondents said they had a “very negative” or “somewhat negative” view of Israel, while only 28 percent had a “very positive” or “somewhat positive” view.  Despite this unflattering view of Israel, most Canadians believe their government is generally more pro-Israel than pro-Palestinian.  61 percent of Canadians considered their government to be pro-Israel, while only 16 percent considered their government to be pro-Palestinian.

A report on the survey issued jointly by CJPME and its partners concludes that “the Liberal, NDP, and Green party platforms on the questions of Israel-Palestine do not accord with the views of their respective constituencies. In Canada, political elites cling to the view that a vigorous defence of Palestinians rights would erode support for their parties.  The results of this survey strongly suggest that the opposite is true, that demanding Israel’s respect for Palestinian rights will attract voter support. These parties would be advised to revise their political platforms in relation to Israel-Palestine to better reflect their constituents’ views.  Furthermore, given these survey results, members of these parties should more confidently call for these policy changes.”

“Canadian political leaders can no longer say they don’t know how Canadians feel on these things,” asserted Woodley.  CJPME has long encouraged the Canadian government to put more emphasis on international law and human rights in the discussion of the Israel-Palestine conflict. “Our leaders need to develop a new doctrine on Israel and the Middle East which reflects Canadians’ decency, and Canadians’ desire for a just and peaceful resolution of the Israel-Palestine conflict,” concluded Woodley.