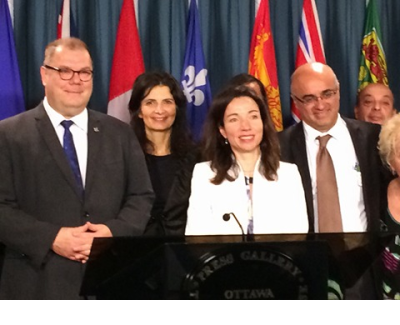 Montreal, May 29, 2017  — Canadians for Justice and Peace in the Middle East (CJPME) congratulates the Bloc Québécois’ visionary proposal calling Canada to recognize an independent Palestine.  In a press conference on Parliament Hill in Ottawa this morning, the Bloc announced a motion inviting the House of Commons to express support for Palestine as an independent state.  “136 of 193 nations already recognize Palestine as an independent state,” stated Thomas Woodley, President of CJPME, “So it is only natural for Canada to support international law and join the international consensus in support of Palestinian self-determination.”

In a joint press conference, Martine Ouellet, leader of the Bloc Québécois and Mario Beaulieu, former leader and MP for Pointe-de-L’Île, provided a compelling case for the need to recognize Palestine.  They first pointed out how international law guarantees the right to self-determination of all peoples.  They also listed several UN resolutions on the mid-east conflict which provide the basis for a Palestinian state based on the “Green Line,” the de facto border based on the 1949 Armistice agreement.  They also cited passages from Canada’s official position on the Israeli-Palestinian conflict, whereby Canada theoretically supports an independent, viable Palestinian state, in peace with its Israeli neighbour.

“This visionary move by the Bloc is encouraging to many Canadians and Quebecers who have tired of international dithering on the rights of Palestinians,” asserted Woodley.  “Palestinian-Canadians, Jewish-Canadians, and other progressives of all backgrounds see this as a key step to the resolution of this decades-long conflict.”  CJPME and other groups in Canada – including some Jewish-Canadian groups – have long called for the recognition of Palestine.  All major federal political parties theoretically support a “negotiated two-state solution” for peace between the Israelis and Palestinians.  However, the Bloc is the first federal party to call for the independent recognition of Palestine.

The Bloc’s motion in support of Palestine coincides with the 50th anniversary of Israel’s military occupation and colonization of the PalestinianTerritories. Israel’s ongoing expansion of illegal colonies in the West Bank is a symbol of its failure to honour the two-state solution, as such activities preclude the possibility of a viable independent state. CJPME strongly encourages Canada’s other federal parties to join the Bloc’s initiative in supporting Palestinian human rights.