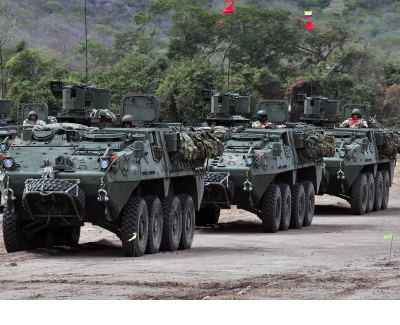 Montreal, July 31, 2017  — Canadians for Justice and Peace in the Middle East (CJPME) demands that the Canadian government immediately review its existing $15 billion arms deal with Saudi Arabia. Over the weekend, news sources published videos and photographs of Canadian-made armoured personnel carriers (APC) being used by the Saudi government to crackdown on Saudi civilian dissidents. The APCs that appear in the video were manufactured by Terradyne Armored Vehicle Inc., a privately owned company in Newmarket, Ontario.

Foreign Affairs Minister Chrystia Freeland stated she is “deeply concerned” that Canadian-made armoured vehicles appear to be implicated in this violent crackdown by Saudi authorities. Just last week, prior to the release of photos of the Canadian APCs, Global Affairs Canada admonished Saudi Arabia for government violence against civilians, stating, "[Security] challenges must be addressed in a manner that abides by international human rights law."  Global Affairs asserted that if, in fact, “it is found that Canadian exports have been used to commit serious violations of human rights, the minister will take action.”

The video footage of Terradyne APCs being misused by Saudi authorities demonstrates the urgent need for the Canadian government to review the recent $15 billion dollar deal supplying Ontario-manufactured Light Armoured Vehicles (LAVs) to the Saudi state.  CJPME President Thomas Woodley stated, “The Canadian government must modulate commercial relationships as a function of respect for human rights."  CJPME has long called for better enforcement of Canada's export control laws, in addition to ensuring a compliant accession to international Arms Trade Treaty (ATT).  While existing Canadian export controls explicitly outline that Canada should not export military or defence materials to countries “whose governments have a persistent record of serious violations of the human rights of their citizens,” these controls were effectively disregarded by the Harper and Trudeau governments.

Despite decades of human rights abuses committed by the Saudi government against its own citizens, and repressive breaches of international law in Yemen, the Trudeau government nonetheless went ahead with the $15 billion dollar arms deal. Even prior to the latest photos of the Canadian APCs, there was ample evidence that Saudi Arabia might use Canadian arms to commit human rights abuses.  The latest revelation only strengthens the call for a full export control review of Saudi Arabia's LAV purchase from Canada.