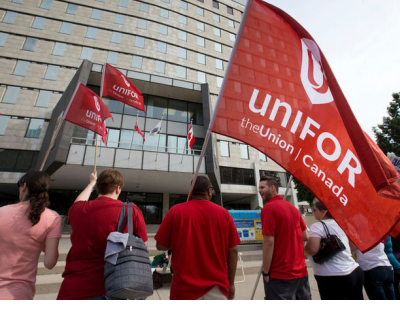 Montreal, September 6, 2017  — Canadians for Justice and Peace in the Middle East (CJPME) congratulates UNIFOR, Canada’s largest private-sector union, for the passage of a BDS motion at its recent convention. Resolution no. 5, entitled, “Palestinian Self-Determination and the Movement for Boycott, Divestment and Sanctions,” was put forth by the Oshawa-based Local 222 and was “easily” adopted at the Unifor Canadian Council, held in Winnipeg from August 18-20th.

Among other things, the resolution calls on UNIFOR to:

“This is a significant development for the Canadian human rights movement,” declared CJPME President Thomas Woodley. “We hope that our government will respect the demands of civil society by adopting similar policies.”  CJPME supports UNIFOR’s adoption of non-violent political measures to shed light on the situation of the Palestinians. CJPME points out that many Canadians have grown impatient with Canadian parties which proclaim support for a negotiated two-state solution in Israel-Palestine, but ignore both the fact that no negotiations are taking place, and the fact that Palestinians suffer terribly under the status quo.

The BDS movement calls for 1) and end to Israel’s military occupation of the West Bank, 2) equal rights for Palestinian citizens of Israel, and 3) the right of Palestinian refugees to return to their homes or receive compensation.  The BDS movement is non-violent, grounded in principles of international law, and condemns unjust behaviour. Neutral observers view the BDS movement as a legitimate means of protest and pressure in a democracy – being neither “anti-Israel” nor “anti-Semitic” – in response to a specific 2005 call from Palestinian civil society.  CJPME also points out that the goals of BDS actually align with Canada’s official foreign policy positions on Israel-Palestine. Despite backlash from pro-Israel lobbies, the BDS movement continues to grow as Canadian citizens and organizations, including UNIFOR, choose to take a stand for human rights.