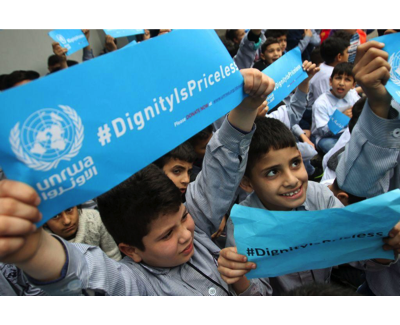 March 15, 2018 — Canadians for Justice and Peace in the Middle East (CJPME) applauds the Canadian government’s announcement today of an extra $10 million in funding to UNRWA, the UN aid agency serving Palestinian refugees.  Canada’s pledge was announced in the midst of an emergency summit this week in Rome, and was accompanied by pledges of support by other countries, including Qatar, Italy and others.  The UNRWA faces a funding crisis, exacerbated by the Trump government’s decision to withhold $65 million in pledged funding to the organization.

“This is money well-spent, which will help enable the most vulnerable Palestinian refugees gain access to food aid, and essential health and educational services,” declared Thomas Woodley, President of CJPME.  The Trudeau government restarted funding to UNRWA in 2016, after the Harper government had cut all funds for Palestinian refugee aid.  In addition to the challenges that these refugees already face, years of war in Syria and Iraq have gravely worsened the plight of Palestinian refugees in those countries.

CJPME points out that, despite attacks from its detractors, UNRWA maintains the highest professional standards as an international aid agency.  CJPME’s President, Thomas Woodley, published a series of articles addressing disinformation about UNRWA circulated in Canada following the Trudeau government’s renewal of funding in 2017.  False rumours about UNRWA employment standards, employee conduct, and educational materials are malicious and immoral, and seek to deny basic services like schooling and healthcare to one of the world’s most needy populations.

CJPME has often pointed out that Canada and other Western nations, because of their support for the partition of Palestine-Israel in 1947, bear responsibility for the over 5 million Palestinian refugees scattered across the Middle East today.  Until the international community can devise a solution for these refugees, it is responsible to guarantee their safety and well-being.  CJPME also points out that the needs and plight of these civilian refugees are independent of the actions of other actors in the Israel-Palestine conflict, whether the Palestinian Authority, Hamas, or others.