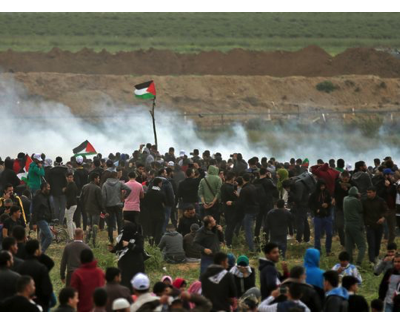 Montreal, April 10, 2018 — Canadians for Justice and Peace in the Middle East (CJPME) condemns the Canadian government’s silence on the Israeli massacres unfolding in Gaza. Since March 30th, Palestinians have held a series of peaceful demonstrations at Gaza’s border with Israel, calling for the right to return to their homeland. The Israeli military has reacted by unlawfully targeting Palestinian civilians.  Over a week into the demonstrations, 27 Palestinians have been killed, and over a thousand injured by Israeli sharpshooters.

“Amnesty International and other human rights organizations have criticized Israel’s brutal and disproportionate response,” stated Thomas Woodley, president of CJPME.  “Condemning Israel’s shooting of literally thousands of civilians by regular Israeli soldiers should be a ‘no brainer,’” continued Woodley.  CJPME points out that Israel’s shootings of Palestinian civilians in Gaza are also in violation of the Fourth Geneva Convention, which prohibits targeting civilians.  As a signatory to the Fourth Geneva Convention, Canada is sworn to uphold its tenets.

Amnesty International stated “As the occupying power, Israel must uphold the rights of Palestinians to peaceful protest and freedom of expression. […] Lethal force must never be used against peaceful protesters.”  The Prosecutor of the International Criminal Court (ICC) condemned the violence in Gaza, reminding the world that “violence against civilians – in a situation such as the one prevailing in Gaza – could constitute crimes under the Rome Statute of the International Criminal Court.” The EU and UN have called for “independent” and “transparent” investigations into the violence.

Palestinians in Gaza have lived under a crippling Israeli-led international blockade for 12 years since the election of Hamas to power in 2006.  The demonstrations in recent weeks have sought to bring world attention to the beleaguered territory and its citizens.  The territory of Gaza is about the size of the island of Montreal, and Israel tightly controls all entry and exit from the territory. Even those who have a medical emergency, or who have scholarships to study abroad can be blocked by Israel.  Israel also blocks or obstructs the flow of many civilian supplies into Gaza, including many construction supplies like wood, concrete and steel bars.