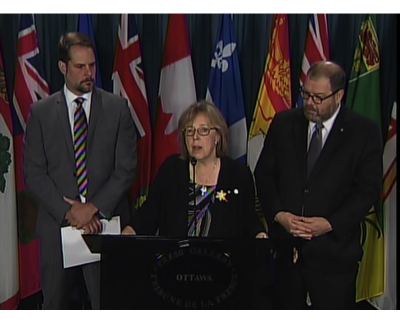 CJPME notes that during the press conference, the MPs repeatedly emphasized the eye-opening and shocking nature of the trip. These MPs expressed a significant degree of concern with the reality on the ground in the West Bank – a situation that MP Elizabeth May accurately described as “an [Israeli] project of colonialism and expansion; a permanent occupation with a military dictatorship that governs every waking and sleeping moments of Palestinians.” CJPME points out that the MPs raised several human rights issues related to the Israeli military occupation: namely the presence of militarized Israeli colonies in the West Bank, Israeli-only roads and water access, and the mistreatment of Palestinian children. MP Alexandre Boulerice labelled Israel’s military occupation as one of “segregation and discrimination,” while MP Mario Beaulieu stated that the situation is “practically apartheid.”

Following their trip to Palestine, the MPs will be producing a report and recommendations, which will be sent to the Prime Minister’s Office for consideration. The MPs hope that the report will influence Canada’s official position on Israel-Palestine. A position which, according to MP Boulerice, is in theory excellent but almost never implemented in practice, where even at the UN, Canada’s voting record does not align with official Canadian foreign policy on Israel-Palestine. CJPME President Thomas Woodley responded, “It is encouraging to see Canadian MPs finally call Israel’s actions in the West Bank by name – colonization and apartheid. I hope this trip will serve as a catalyst for the Canadian government to issue a much-needed condemnation of Israel’s longstanding human rights abuses against Palestinians.”

CJPME commends these MPs for taking a principled stand for Palestinian human rights. CJPME has long encouraged members of Parliament to visit the West Bank and other Palestinian territories to gain a better perspective on the harsh realities on the ground for Palestinians. CJPME is thrilled that members of each of the five Canadian federal political parties were able to participate in the fact-finding trip to Palestine from March 30th to April 6th.