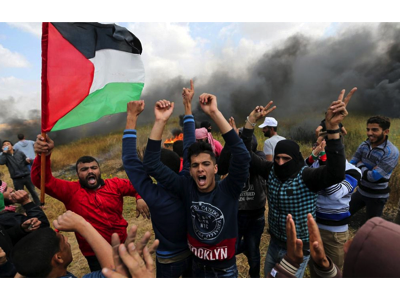 May 17, 2018 — Canadians for Justice and Peace in the Middle East (CJPME) supports Canadian Prime Minister Justin Trudeau’s statement on Gaza. Yesterday, PM Trudeau expressed grave concern with the outbreak of violence against unarmed Palestinian civilians in the Gaza Strip, and called for an “immediate independent investigation to thoroughly examine facts on the ground – any incitement, violence and the use of excessive force.” CJPME calls on the government to keep its promise to Canadians in investigating Israel’s actions in Gaza.

Over the past several weeks, thousands of unarmed Palestinians in Gaza have been injured, and many killed by Israeli sharpshooters, simply for protesting Israel’s violations of international law. Yesterday, Trudeau finally broke his silence, calling Israel’s use of excessive force and live ammunition “inexcusable.” Indeed, Israel’s shootings of Palestinian civilians in Gaza are “inexcusable,” as they constitute a violation of the Fourth Geneva Convention, which prohibits the targeting of civilians. CJPME points out that the Prime Minister’s statement comes amidst the shooting of Dr.Tarek Loubani, a Canadian citizen that was providing medical treatment to Palestinians injured by Israeli snipers in Gaza.

CJPME President Thomas Woodley remarked, “We are happy that the Trudeau government has finally condemned the shooting of Dr. Loubani and dozens of other innocent Palestinian civilians in Gaza. Like many Canadians, we have been appalled for a long-time by Israel’s grave human rights abuses against Palestinians, and Canada’s muted reactions.”  CJPME looks forward to watching the Canadian government continue to ensure that Israel is held to account for its human rights abuses and violations of international law.

Since March 30th, Palestinians have held a series of weekly protests at Gaza’s border with Israel, calling for the right to return to their homeland. CJPME notes that so far, Israeli sharpshooters have killed over 100 unarmed Palestinians, and injured thousands of others. CJPME calls on the government to ensure that Canadians receive an explanation as to why a Canadian doctor would be targeted by the Israeli military. Moreover, CJPME calls on PM Trudeau to keep his promise to Canadians and follow through with an immediate independent investigation into Israel’s violent actions in Gaza.