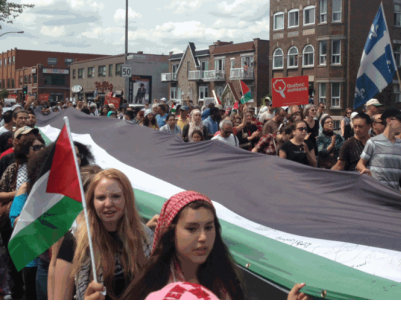 May 22, 2018 — At least 16,000 Canadians have emailed support for Prime Minister Trudeau’s comments last Wednesday condemning Israel’s use of live ammunition on Palestinian protesters.  These thousands of emails were sent to Trudeau, Foreign Affairs Minister Chrystia Freeland, and other Parliamentary leaders and critics via a platform set up by Canadians for Justice and Peace in the Middle East (CJPME.)  The local MPs of each person who used the platform were also copied on the emails sent.  This number does not include the many individuals who expressed support via other means.

“It is clear that Trudeau’s remarks last Wednesday have the support of a vast portion of Canada’s electorate,” remarked Thomas Woodley, President of CJPME.  “The shooting of unarmed Palestinian protesters by Israel is odious, and Canada is right to pressure Israel to provide an accounting,” continued Woodley.  Trudeau’s statement expressed deep concern over Israel’s killing of over 55 protestors last Monday stating, “We are appalled that Dr. Tarek Loubani, a Canadian citizen, is among the wounded – along with so many unarmed people, including civilians, members of the media, first responders, and children.”

CJPME notes that Canadian pro-Israel lobby groups also sought to mobilize their own supporters to oppose Trudeau’s statements, but their numbers fell far short of those supporting Trudeau’s position.  This may be due to a broadening consensus that Israel’s right-wing government is excessively obstinate and violent.  The Fourth Geneva Convention outlaws attacks on civilians, as well as medical personnel, yet Israel continued to kill and wound Palestinian protesters – including children and medical personnel – for a period of over a month.  Since March 30 alone, Israel has shot dead over 100 protesters, and wounded over 2,500 more.

“Real democracies do not shoot protesters,” asserted Woodley.  “If necessary, they arrest them and charge them with a crime.”  No Israelis have been harmed by the protests, and no Israeli property has been damaged.  CJPME points out that Trudeau government leaders have often referred to Israel as a “friend and ally.”  CJPME assumed that this friendship would have been sufficient to move Israel to respect Trudeau’s call for an independent investigation into the deaths and injuries from Israeli fire into Gaza.  Nevertheless, the Netanyahu government appears to have rejected Trudeau’s call.  Given Canada’s unquestioning support for Israel in international fora, many see this as a slap in the face by Israel.