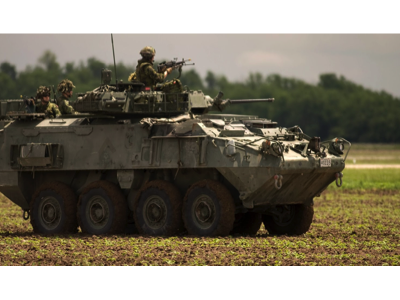 Montreal, July 5, 2018 — Canadians for Justice and Peace in the Middle East (CJPME) is proud to join Amnesty International, and six other human rights organizations in calling for an independent, external review into allegations of misuse of Canadian military exports by Saudi Arabia. While the government conducted an internal review of the allegations last year, CJPME and its collaborating organizations* issued a joint letter to Foreign Affairs Minister Chrystia Freeland that expresses deep concerns with major shortcomings in the report and calls for an independent review.

Last year, after videos surfaced of Canadian-made light armoured vehicles being used against civilian populations in Eastern Saudi Arabia, Minister Freeland ordered an internal investigation into the matter. The investigation’s report, which was released in May 2018, conveniently concluded there was no “concrete evidence” that could corroborate claims that the vehicles were implicated in the killings of Saudi civilians. CJPME and its partners identified several significant shortcomings in the department’s review, namely: flawed interpretations of Canadian obligations under international law, the weak credibility of sources, the failure to assess potential risks of misuses, the analysis approach and the biased considerations that influenced the overall outcome of the report.

CJPME is gravely disappointed by the degree to which the government report downplayed human rights concerns, while emphasizing its commercial relationship with Saudi Arabia.  For example, the report insists that “despite its human rights record, Saudi Arabia remains an important partner for Canada” and that “Canada… has an important and growing commercial relationship with Saudi Arabia.” CJPME President Thomas Woodley responded saying, “Commercial considerations should never trump legitimate concerns over human rights violations.  The Canadian government has done a disservice to our own values, and has shown shameful disregard for the lives of Saudi civilians.”

CJPME points out that the Trudeau government is in the process of legislating Canada’s accession to the international Arms Trade Treaty (ATT) through Bill C-47. The ATT seeks to contribute to regional peace and prevent human suffering by “establishing the highest possible international standards for regulating or improving the regulation of the international trade in conventional arms.” In the spirit of the Treaty, CJPME reiterates the report’s call for an independent review into allegations of misuse of Canadian arms in Saudi Arabia.

*Signatories to the joint letter include Amnesty International Canada (English branch), Amnistie internationale Canada francophone, Project Ploughshares, Oxfam-Canada, Oxfam-Québec, Rideau Institute, Group of 78, Canadians for Justice and Peace in the Middle East, and the Human Rights and Research Education Centre at the University of Ottawa.