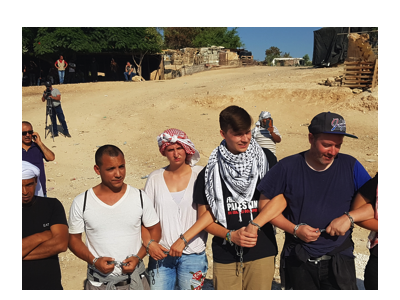 Montreal, July 5, 2018 — Canadians for Justice and Peace in the Middle East (CJPME) is calling for Canadian intervention following the arrest of 21-year old Canadian citizen Michaela Lavis in the Palestinian village of Khan al-Ahmar. Lavis and a dozen other international human rights activists were arrested this morning while trying to defend Khan al-Ahmar from Israeli demolition. CJPME calls for Canadian intervention to ensure the immediate release of Michaela Lavis, and to protect the Palestinians of Khan al-Ahmar from more Israeli human rights violations.

The destruction of Khan al-Ahmar, a Bedouin Palestinian village located just outside of East Jerusalem, seems to be part of a larger Israeli plan to expand its settlements in the areas around Jerusalem. If completed, the construction of Israeli settlements over Khan al-Ahmar would further divide the land slated for a future Palestinian state, and increasingly isolate Palestinians in and around Jerusalem.  Israeli human rights organization B’Tselem has warned the international community that such forced transfers, evictions, and demolitions constitute war crimes. CJPME President Thomas Woodley commented, “CJPME has repeatedly called on the Canadian government to condemn Jewish-only Israeli colonies in the West Bank. The situation unfolding in Khan al-Ahmar is the brutal reality that comes with illegal settlement expansion – destruction and forced displacement.”

CJPME points out that Israel’s settlements and the forcible transfer of a population are both illegal under international law, as they contravene the Fourth Geneva Convention and the Rome Statute. Under international humanitarian law, Israel as an occupying power is obliged to ensure the well-being of Palestinian civilians in the occupied territories. The United Nations, European Union and Canadian allies such as Britain and France have already issued strong condemnations against Israel’s illegal actions in Khan al-Ahmar. Several Western diplomats, activists and journalists attempted to make their way to Khan al-Ahmar this morning but were blocked entry by Israeli police.

In December 2016, the UN Security Council (Resolution 2334) condemned Israel’s settlement activity as a “flagrant violation of international law” that has “no legal validity.” CJPME calls on the Canadian government to join its international allies in condemning Israel’s brazen violations of international law, and to demand that Israel stop the demolition of Khan al-Ahmar. CJPME furthermore calls on the Canadian government to take immediate action to ensure the safety and release of Canadian citizen Michaela Lavis.