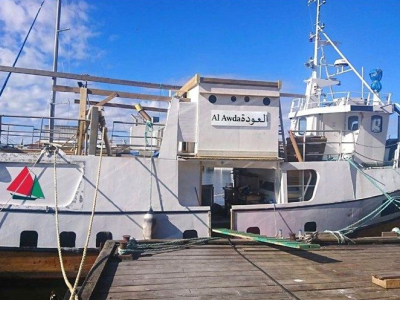 Montreal, July 31, 2018 — Canadians for Justice and Peace in the Middle East (CJPME) strongly opposes Israel’s illegal interception of a civilian boat carrying humanitarian aid and medical supplies to the besieged Gaza Strip. The boat, “Al-Awda” – meaning “the return” in Arabic – was carrying 22 internationals and around 50,000 dollars’ worth of medical equipment when it was intercepted in international waters by Israeli warships on Sunday. The boat’s passengers were immediately arrested. While a few participants have been released, most of the crew and passengers – including Canadian Larry Commodore of the Stó:lo First Nation – are currently being held under unlawful detention in Israeli prison. CJPME calls on the Canadian government to facilitate the swift release of these human rights defenders and ensure the safe passage of “Al-Awda” and its aid supplies to Gaza.

CJPME points out that “Al-Awda” is one of four boats that make up the Freedom Flotilla Coalition, a campaign that brings together international human rights activists who oppose Israel’s illegal blockade against the Palestinian people in Gaza. Indeed, since 2006, Israel has imposed a crippling air, sea, and land blockade on the Gaza Strip – a type of collective punishment which is in contravention of international law. In addition to advocating for the freedom of movement of Palestinians, the Freedom Flotilla Coalition calls on Israel to end its decades-long occupation and colonization of Arab lands, dismantle Israel’s Wall, recognize the rights of Palestinian citizens of Israel to full equality, and protect the rights of Palestinian refugees.

CJPME notes that the United Nations has warned that if the siege of Gaza persists, by 2020 Gaza will be uninhabitable. The Freedom Flotilla Coalition has called on the international community to “assume its responsibilities and…to stop impeding our legal right of innocent passage to Gaza to deliver our gift of much-needed medical supplies.” Responding to Israel’s interception, CJPME President Thomas Woodley commented, “Given the degrading humanitarian situation in Gaza, it is unconscionable that Israel would illegally hijack a boat carrying medical supplies to a suffering population in Gaza.”

This is not the first-time human rights defenders have attempted to break Israel’s blockade of Gaza. In 2010, nine Turkish nationals and one American were killed by Israeli commandos in international waters while trying to deliver humanitarian aid to Gaza. The UN and international human rights organizations have repeatedly condemned Israel’s failure to live up to its legal obligations as an occupying power. CJPME calls on Canada to take immediate action to ensure the safety and release of Al-Awda passengers and facilitate the transfer of much-needed humanitarian assistance to Gaza.