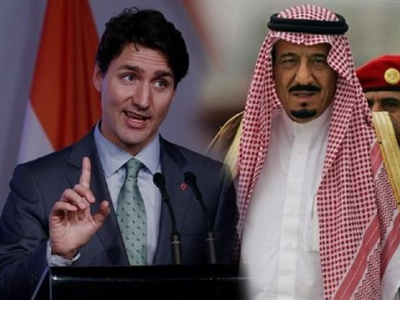 CJPME considers the Saudi sanctions a gross overreaction to a very timid criticism. CJPME points out that Minister Freeland’s use of a “tweet” to call for the release of imprisoned human rights activists was a feeble response to Saudi Arabia’s long-time repression of dissent. Indeed, until now, the Canadian government has been largely silent on Saudi Arabia’s domestic and international human rights abuses. For years, CJPME and others have vocally opposed the Saudi arms deal. In fact, the vast majority of Canadians oppose Canada’s arms trade with Saudi Arabia as well, according to a Fall 2017 poll conducted by Nanos Research, Nonetheless, the Harper and Trudeau governments had more or less continued a "business as usual" approach for years, turning a blind eye to Saudi Arabia’s human rights record.

Given their relatively comfortable relationship, Canada and Saudi Arabia have had a generally cordial relationship that should be able to handle honest feedback. CJPME points out that nation-states have a right to comment on each other’s actions without threatening their respective sovereignty. CJPME President Thomas Woodley remarked, “In order to move towards a freer, more tolerant world, all societies must accept criticism. If Saudi Arabia rightly criticized Canada’s treatment of Indigenous peoples, we should strive to meet a higher standard; we wouldn’t withdraw the Canadian ambassador to Saudi Arabia.”

Saudi Arabia – a monarchy with very limited constitutional protections – has always been one of the most repressive countries in the world. Saudi Arabia’s relatively new leader, Muhammad bin Salman (MbS), has continued the country's sad tradition of jailing and otherwise silencing human rights activists. Since May, for example, more than a dozen Saudi rights activists have been arrested. Saudi Arabia's most recent overreaction against Canada is similar to other aggressive steps MbS has taken domestically and internationally to flex his power.