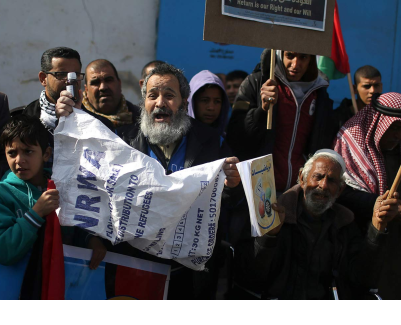 Montreal, September 2, 2018 — Canadians for Justice and Peace in the Middle East (CJPME) opposes US President Donald Trump’s decision to cease all funding to the UN aid agency for Palestinian Refugees (UNRWA).  The Trump administration declared Friday that it was cutting all funding to UNRWA, calling the organization an “irredeemably flawed operation,” and seeking to reduce the number of Palestinians recognized as “refugees” under the UN system.  Nevertheless, CJPME points out that it is the UN which defines which individuals are considered refugees, and that UNRWA adheres to international norms in defining the population of Palestinian refugees that it serves.  “This is a sad ploy by Trump to further disempower Palestinians, to the political advantage of the US’ ally Israel,” declared Thomas Woodley, president of CJPME.

It is extremely unlikely that the UN would suddenly revamp its definition of what constitutes a refugee just to suit the Trump administration’s agenda on Israel-Palestine.  CJPME notes that the world has addressed refugee crises for decades according to fair and humanitarian principles, and has successfully resolved dozens of refugee crises.  “Canada must follow the example of Germany and Japan, and commit to greater funding to UNRWA to offset the US decision,” asserts Woodley.  Canada’s current funding constitutes less than 2% of UNWRA’s overall funds.  Canada, as gavel-holder for the Refugee Working Group, should also step in to fill the gap left by the US’ dearth of legitimate leadership on the issue.

The question of Palestinian refugees has long been considered a “final status” issue, to be determined only as part of a final peace agreement between Israel and the Palestinians.  Just like the situation with Jerusalem, the Trump administration has sought to predefine a solution to the conflict, without bringing the two sides to any mutual compromise.  In response to accusations that the existence of UNWRA impedes a solution to the Israel-Palestine conflict, UNRWA spokesperson Chris Gunness said, “It is not UNRWA that perpetuates the conflict, it is the conflict that perpetuates UNRWA; it is the failure of the political parties through negotiations to produce an overall peace agreement and thereby resolve the refugee crisis.”

UNRWA serves around 5 million Palestinian refugees living mostly in Jordan, Lebanon, Syria, the West Bank and Gaza.  The bulk of its funds support education and health care to the Palestinian refugees under its care.  It is supported by dozens of different international donor organizations, who view it as a key to the stability and development of the Palestine refugee population.  UNRWA began operations in 1950 to serve the 700,000 Palestinians displaced through the 1948 establishment of the state of Israel.  If UNWRA were to cease operations, the refugees under its care would fall under the care of the UN High Commission for Refugees (UNHCR.)