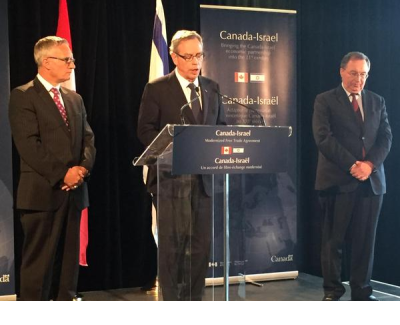 Montreal, November 2, 2018  — Canadians for Justice and Peace in the Middle East (CJPME) calls on the Canadian government to amend the Canada-Israel Free Trade Agreement Implementation Act (Bill C-85). This Bill, introduced in the House of Commons early last week, seeks to modernize the Canada-Israel Free Trade Agreement (CIFTA). Canadians expect their government to implement trade deals that are in line with Canadian foreign policy and commitments to human rights and international law. CJPME believes that Bill C-85 does not conform to these expectations, and must be amended to do so.

Bill C-85 fails to distinguish between the State of Israel and the occupied territories. Accordingly, the free trade agreement covers products that are made in illegal Israeli settlements in the occupied territories. CJPME points out that neither Canada nor the United Nations recognize these settlements as part of Israel. The Canadian government has long affirmed that these settlements violate the Fourth Geneva Convention. On multiple occasions, the United Nations Security Council has called upon states, including Canada, to distinguish between sovereign Israeli territory and the occupied territories in their dealings with Israel. Consequently, CJPME questions why the Canadian government continues to buck international law and ignore official Canadian foreign policy with Bill C-85.

John McCallum, Canada’s ambassador to China, was recently quoted as saying that a trade deal with China would be impossible until the country improves its human rights record. CJPME urges the government to adopt similar standards in its dealings with the Israeli state. Despite numerous UN Resolutions condemning Israeli human rights violations, Canada has not included any clauses on human rights in Bill C-85. “It is imperative that the Canadian government have an equal expectation of all states,” asserted Thomas Woodley, President of CJPME. “If Russia’s occupation of Crimea is worthy of economic sanctions, why isn’t Israel’s continued occupation of Palestinian territories met with similar sanctions?”

CJPME recognizes that Bill C-85 includes some promising aspects, including chapters on trade and gender, environmental protections, and corporate responsibility. However, CJPME calls on the government to recognize the impact of Bill C-85 on Palestinians living in the occupied territories. CIFTA represents an opportunity to engage Israel in a constructive conversation regarding their human rights abuses. However, as it stands, the Canadian government offers Israel preferential trade treatment without requiring any change in the state’s illicit practices in the occupied Palestinian territories. CJPME points out that this approach undermines Canada’s stated commitment to a viable and just settlement of the Israeli-Palestinian conflict.