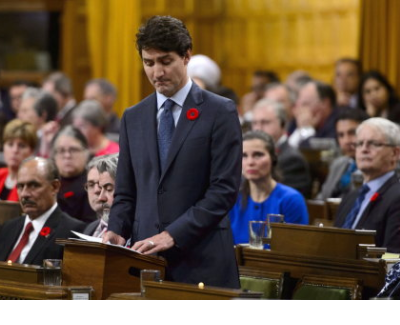 Montreal, November 8th, 2018 — Canadians for Justice and Peace in the Middle East (CJPME) is surprised and disappointed by Prime Minister Trudeau’s smear on Canadians who support the peaceful boycott, divestment and sanctions movement against Israel – known as BDS. Yesterday, PM Trudeau stood up in the House of Commons to apologize for Canada’s rejection of the hundreds of Jewish refugees in the MS St. Louis who were turned away by Canada in 1939, many of whom would be subsequently killed in the Holocaust. While delivering this long overdue apology, Trudeau shifted the conversation to condemn Canadians who support BDS and legitimate criticism of Israel. CJPME rejects Trudeau’s suggestion that of criticism of Israel is in any way related to the despicable anti-Semitism experienced by Jews in Canada.

CJPME points out that BDS is a legitimate non-violent movement designed to put economic pressure on the Israeli government until it respects Palestinian human rights. BDS calls for 1) an end to Israel’s military occupation of the West Bank, 2) equal rights for Palestinian citizens of Israel, and 3) the right of Palestinian refugees to return to their homes or receive compensation. Indeed, the objectives of BDS are fully aligned with official Canadian foreign policy and international law and condemn unjust behaviour.

In response to Trudeau’s smear on pro-justice activists, CJPME President Thomas Woodley stated, “Rather than focussing on combatting the reality of anti-Semitism and anti-immigrant attitudes in Canada, Prime Minister Trudeau distracted from the real issues at hand by veering off topic to defend Israel’s interests.” CJPME questions why Prime Minister Trudeau chose to concentrate on Israel in his apology to Jewish refugees, when there is so much more to be done to fight the anti-Semitism and xenophobic bigotry that prompted actions like the turning away of the MS St. Louis in the first place. CJPME believes that Canada’s apology to Jewish refugees is meaningless if the government continues its abusive practices of detaining and deporting asylum seekers today. If the government truly wants to take a stand against anti-Semitism and xenophobia, CJPME believes it should stop these harmful practices and prevent similar actions by designating January 29th as a National Day of Remembrance and Action on Islamophobia and other forms of religious discrimination.

CJPME notes that when it comes to human rights and the fight against racism and religious discrimination, the Trudeau government has not lived up to its promise for “real change.” This is not the first time Justin Trudeau has launched an attack on BDS supporters. In 2016, the Trudeau government passed a parliamentary motion condemning Canadian human rights activists who promote Palestinian human rights. Amnesty International vocally opposed this parliamentary motion as a violation of free speech and legitimate criticism of Israel. CJPME also points out that as of yet, the Liberal government has failed to implement any concrete measures to combat Islamophobia, anti-Semitism and other forms of systemic racism and religious discrimination in Canada.