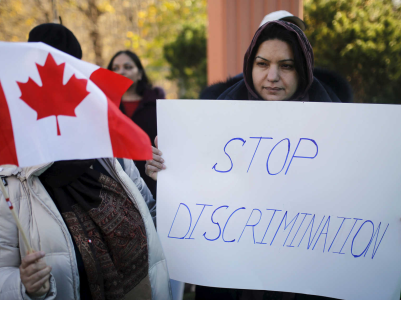 Montreal, November 30th, 2018 — Yesterday, Statistics Canada (StatCan) released the police-reported hate crime statistics for 2017, revealing a 47% increase in hate crimes in Canada, especially those targeting Muslim, Jewish and Black populations. Canadians for Justice and Peace in the Middle East (CJPME) is deeply concerned by the dramatic increase in hate crimes in Canada, which confirms the urgent need for the government to take concrete action against Islamophobia and other forms of religious discrimination. While StatCan recorded an increase in hate crimes across all categories of religion, StatCan notes that Muslims specifically experienced the highest increase in hate crimes, with the number more than doubling in 2017.  CJPME calls on the government to take immediate action to address this phenomenon by adopting January 29th as a National Day of Remembrance and Action on Islamophobia.

In October 2018, CJPME and the Canadian Muslim Forum (FMC-CMF) launched the January 29 campaign, calling on the government to designate January 29th as a National Day of Remembrance and Action on Islamophobia and other forms of religious discrimination, as per recommendation #30 of the M-103 report from Parliament's Heritage Committee. The StatCan report makes clear that there is a need for the government to respond to this timely campaign. In Quebec, hate crimes against Muslims tripled over the 2016-2017 period, largely due to a spike in incidents following the Quebec City mosque massacre on January 29th, 2017.

“This significant rise in hate crimes compels Canada to take immediate action to face up to this pervasive problem. Political goodwill and platitudes are not enough, they must be backed up by tangible action that supports communities that are experiencing hate crimes,” asserted Thomas Woodley, President of CJPME.  CJPME and other civil society organizations are very supportive of the recommendations of Parliament’s Heritage Committee report of February, 2017, and encourage the government to take action on all of the committee’s recommendations.