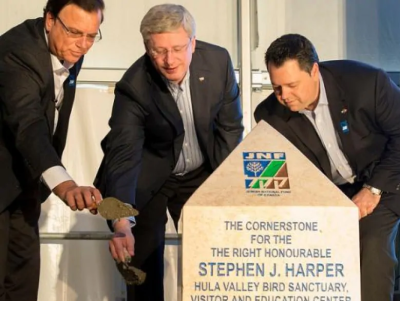 Montreal, January 4th, 2019 — Canadians for Justice and Peace in the Middle East (CJPME) applauds the Canadian media’s scrutiny of the Jewish National Fund (JNF) – Canada. On Friday, the CBC’s Evan Dyer published a thorough article exposing how the JNF-Canada is in contravention of both Canadian and international law through its financial support of the Israeli military and projects that dispossess Palestinians of their land. The JNF-Canada’s illicit activities have been an open secret for years, and CJPME is pleased to see mainstream Canadian media discussing the problem.

As Dyer points out in his article, Independent Jewish Voices Canada supporters launched a formal complaint against the JNF-Canada to the Canada Revenue Agency (CRA) in 2017. The complaint recognized the JNF used charitable donations to support a foreign military, in violation of Canada’s tax regulations for charities. The complaint furthermore highlighted the JNF’s complicity in Israel’s settler-colonial projects, which official Canadian foreign policy opposes and the UN has called a “flagrant violation” of international law (Dec. 2016). Indeed, the CRA states that an organization cannot be charitable if its activities run counter to public policy. CJPME points out that one of the complainants is Palestinian-Canadian Dr. Ismail Zayid, whose village was deliberately demolished and dispossessed by Israel in 1967 and has since been transformed by the JNF into “Canada Park” – a park that is located on occupied Palestinian territory.

Charity Intelligence – a Canadian not-for-profit organization – has been highly critical of the JNF’s financial management, accusing the organization of having zero financial transparency or accountability measures in place. CJPME recognizes that most supporters of the JNF likely do not assume their donations will be rerouted to fund a foreign military or used to advance an illegal military occupation. CJPME President Thomas Woodley commented, “Canadians expect their donations to be used toward truly charitable endeavors, not toward the perpetuation of human suffering.”

For years, CJPME has called attention to the JNF-Canada’s involvement in Israeli human rights abuses against Palestinians. The CBC’s exposé also demonstrates that numerous politicians from different governments have exhibited support for the JNF without giving proper scrutiny to the organization’s record. CJPME calls on Canadian politicians to cease support for JNF activities until the organization demonstrates accountability and a willingness to respect Canadian and international law.