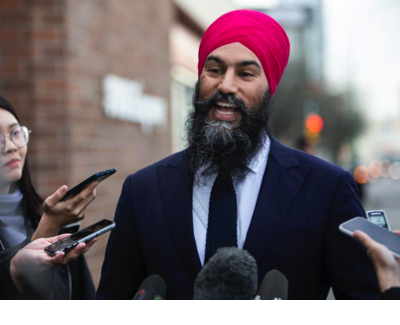 Montreal, January 17th, 2019 — Canadians for Justice and Peace in the Middle East (CJPME) applauds the New Democrat Party of Canada’s (NDP) support for the January 29th campaign (http://january29.ca) against Islamophobia in Canada. The campaign, initiated by CJPME and the Canadian Muslim Forum (FMC-CMF), calls on the government to designate January 29th – the anniversary of the Quebec City Mosque Massacre – as a National Day of Remembrance and Action on Islamophobia and other forms of religious discrimination, as per recommendation #30 of the M-103 report from Parliament's Heritage Committee.

Yesterday, NDP Leader Jagmeet Singh sent out an email in support of the January 29th campaign, reminding Canadians that we all need to “learn from the heartbreak in Quebec City on January 29th—to push back against hatred in our society and make sure the loss of innocent lives never happens again.” CJPME President Thomas Woodley commented, “I am thrilled that the NDP recognizes the importance and urgency attached to this campaign. Islamophobia is a grave problem in Canada that must be addressed by our political representatives in order to prevent similar acts of hatred or discrimination.”

CJPME points out that as a result of the January 29th campaign (http://january29.ca), Singh has already received nearly 4,000 emails from Canadians across the country urging immediate action against Islamophobia. CJPME is pleased that the NDP has taken the time to listen to valid Canadian concerns and has responded with a principled stand in support of Canadian Muslims. CJPME calls on all Canadian political parties to support the call to designate January 29th as a National Day of Remembrance and Action on Islamophobia and other forms of religious discrimination in Canada.

CJPME and the FMC-CMF launched the January 29th campaign in October 2018. Thus far, over 150 Canadian organizations and academics have formally endorsed the campaign. Canadian individuals are also encouraged to add their voice to the campaign online, where they can sign a petition while sending an email and postcard to their Member of Parliament.