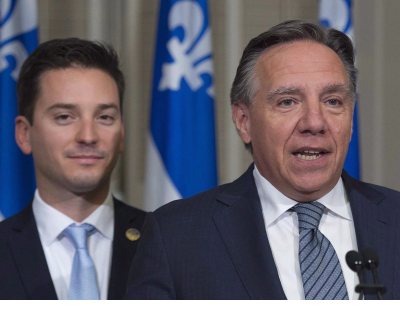 Montreal, March 28th, 2019 — Canadians for Justice and Peace in the Middle East (CJPME) strongly condemns the Quebec government's new "secularism" bill – bill 21 – for being discriminatory and unconstitutional.  Entitled “An act respecting the laicity of the state,” the bill states that public servants in positions of authority, including judges, prosecutors, police officers, prison guards, court security, peace officers, school principals and elementary and high school teachers, will not be allowed to wear religious symbols while on the job.  A secular organization, CJPME opposes the bill as an infringement on the rights of Canadians of Middle East origin, especially Muslim-Canadians.  The Canadian Charter of Rights and Freedoms prevents the government from passing laws which prevent or inhibit Canadians from practicing their religion.

CJPME points out that the timing of the bill is highly suspect, coming during a time of increased Islamophobia across the country, especially in Quebec.  CJPME and the Canadian Muslim Forum (CMF) commissioned and published a survey on Islamophobia in 2018 which confirmed the existence of Islamophobic attitudes in Canada – especially Quebec.  "It is extremely upsetting that the CAQ government has chosen to advance this bill," said Thomas Woodley, President of CJPME. "Quebec's religious communities have lived actively and harmoniously in the broader society for years, and as such, this bill seems expressly intended to target Muslim-Canadians, especially those wearing the hijab."  CJPME calls the Quebec government to withdraw the bill and stop its campaign to discriminate against the province's Muslim-Canadian minority.

Supporting CJPME's opposition to the bill, legal experts who have looked at the bill assert that any resulting law would not withstand a court challenge.  Expecting this, Quebec's Legault government has said that it would invoke the "Notwithstanding" clause to prevent a court challenge.  "Legault's announcement that he would use the Notwithstanding clause is basically a sad admission that the Quebec government knows that its law is unconstitutional," asserted Woodley.

CJPME joins many organizations in opposition to the new bill.  The English Montreal School Board opposes the bill because it believes the bill to be contrary to the values it teaches its children. A Quebec teachers’ union has also said it will challenge the law in court.  For years, CJPME has been fighting for the right of Muslim-Canadians to be welcomed and respected in Canadian society.  Following the terrible January 29, 2017 attack on a Quebec City mosque, CJPME – in partnership with the CMF – launched a campaign calling for January 29th to be a national day of remembrance and action against Islamophobia and all other forms of religious discrimination.  To date, the campaign has garnered over 7000 supporters.