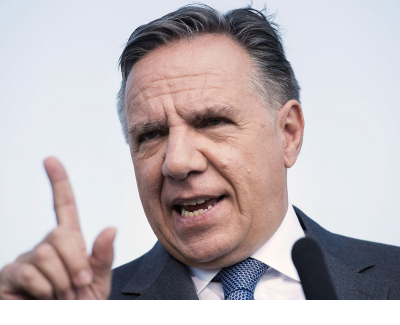 Montreal, June 17, 2019 — Canadians for Justice and Peace in the Middle East (CJPME) strongly condemns Bill 21, which in the name of government “secularism,” will now bar Quebeckers who wear religious symbols from taking certain government positions. Despite months of public outcry and severe criticism from human rights groups, late last night the Quebec government passed Bill 21 into law. CJPME condemns Bill 21 as a violation of Quebeckers’ fundamental human rights and calls on Canadian politicians to condemn Bill 21 as institutionalized discrimination.

A secular organization, CJPME has vocally opposed Bill 21 as a violation of the Canadian Charter of Rights and Freedoms which unfairly persecutes minorities in Quebec – especially Muslim Canadian women who wear hijab. CJPME notes that Bill 21 will further entrench division and difference, while infringing on the democratic values of Quebeckers, such as the rights to religious equality and gender equality. With the passage of Bill 21, religious minorities in the province of Quebec have been reduced to second-class citizens, who risk being economically disadvantaged and prevented from practicing their livelihoods under this bill. Indeed, visibly religious Quebeckers will now be prevented from taking new positions as teachers, principals, police officers, lawyers, and judges if they wish to wear any religious symbols, e.g. hijabs, kippahs, turbans, etc. CJPME notes that late last night, the Legault government also announced that it will be developing surveillance and disciplinary mechanisms to ensure the law is being respected, in a move that many fear will lead to the creation of a discriminatory “secularism” police force.

Responding to the passage of Bill 21, CJPME President Thomas Woodley stated, “Yesterday, June 16th, will be recorded in history as a dark and shameful day for the province of Quebec. Bill 21 is a huge setback for human rights and sets a dangerous precedent for Quebec society.” CJPME recognizes that while today it is religious Quebecers who are targeted through Bill 21, this legislation paves the way for other discriminatory laws targeting other members of Quebec society. Woodley continued, “The battle is far from over – Canadians of all backgrounds will continue to vocally oppose and challenge Bill 21. We refuse to allow the rights of our religious co-citizens to be trampled upon.”

For years, CJPME has been fighting for the right of Muslim-Canadians to be welcomed and respected in Canadian society. In 2018, CJPME and the Canadian Muslim Forum (CMF) commissioned and published a survey on Islamophobia which confirmed the existence of Islamophobic attitudes in Canada – especially Quebec. Last fall, following the terrible January 29, 2017 attack on a Quebec City mosque, CJPME – in partnership with the CMF – launched a campaign calling for January 29th to be a National day of Remembrance and Action against Islamophobia and all other forms of religious discrimination. CJPME will continue to call on Canadian politicians to condemn all forms of Islamophobia and religious discrimination.