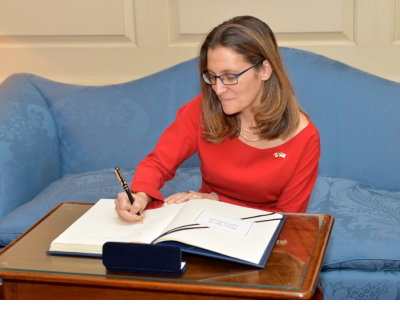 We Canadian civil society organizations, namely, Amnesty International Canada, Canadians for Justice and Peace in the Middle East, Oxfam Canada, Oxfam- Quebec, Project Ploughshares and the Rideau Institute, long active in the effort to strengthen Canadian controls on the export of military equipment, today applaud the Government of Canada’s formal announcement of this country’s accession to the global Arms Trade Treaty.

As Minister Freeland herself stated, the ATT opened for signature in 2013 so this step by Canada is long overdue and most welcome. In particular we commend the Government of Canada for the legislative and regulatory changes to Canada’s export control regime to more effectively regulate Canada’s arms exports in accordance with the high global standards set out in the ATT.

“Canada’s new arms export vetting procedures include an obligation on the Foreign Minister to deny an export permit where there is a “substantial risk” the Canadian-made weapons could be used to commit or to facilitate serious human rights abuses or undermine international peace and security.” - Cesar Jaramillo, Project Ploughshares

Another important change to existing practice is that, for the first time ever, export permits will be required for some US-destined weapons – namely full conventional weapons systems, albeit under an expedited method without a prior risk assessment.

“The inclusion of at least some exports to the USA is a modest first step toward full compliance and transparency in Canada’s military exports with its largest trading partner. Hopefully, Canada will amend the legislation in the future to meet all its obligations under the ATT, which requires export permits and risk assessments for all conventional weapons exports, including parts and components, to all destinations.” – Thomas Woodley, Canadians for Peace and Justice in the Middle East (CJPME)

This action by Canada to formally join the Arms Trade Treaty comes against a backdrop of controversy over our continuing export of LAVs to Saudi Arabia, despite that country’s shocking record of internal repression and war crimes in Yemen. Most recently, the UK has suspended weapons exports to Saudi Arabia in light of the UK Court of Appeal ruling them in violation of international law and the U.S. Congress has voted for a second time to ban American arms exports to Saudi Arabia.

We believe that joining the Arms Trade Treaty will only be meaningful if Canada “walks the talk” and ensures that, henceforth, our export of weapons will strictly comply with the global standards set out in that Treaty.