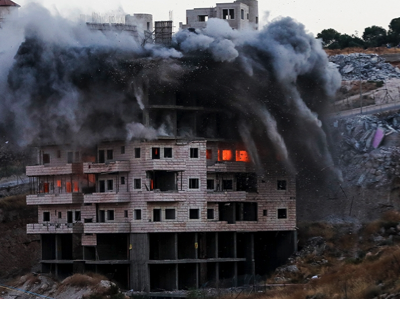 Montreal, July 23, 2019 — Canadians for Justice and Peace in the Middle East (CJPME) is deeply concerned by Israel’s demolition of Palestinian housing units in East Jerusalem. Yesterday, Israeli Occupation Forces entered the Palestinian East Jerusalem village of Sur Bahir in the middle of the night, forcibly displacing Palestinian families to demolish nearly a hundred of their homes. CJPME calls on the Canadian government to break its silence on Israeli human rights violations and condemn Israel’s ethnic cleansing of Palestinian civilians in East Jerusalem.

With the backing of the Israeli Supreme Court, Israel justified yesterday’s home demolitions by arguing that the Sur Bahir homes were built too close to Israel’s “Separation” Wall, built over the past 15 years by Israel in the Palestinian territories. Nevertheless, CJPME points out that a 2004 International Court of Justice (ICJ) ruling condemned Israel’s Apartheid Wall as a violation of international law, calling on Israel to immediately dismantle the Wall and compensate affected Palestinians. Israel’s actions not only contravene this ruling but may also constitute ethnic cleansing. In all cases, by forcibly transferring civilians from their homes under a situation of Israeli military occupation, Israel is committing a crime against humanity.

Yesterday, the United Nations issued a statement condemning the Israeli destruction of Palestinian homes in the West Bank, asserting that Israel’s actions are “not compatible with international humanitarian law.” Likewise, Canadian allies such as France and European Union have already issued strong statements against yesterday’s demolitions. CJPME President Thomas Woodley responded, “The international community must stop allowing Israel to carry out these crimes with impunity. Canada must take concrete action to hold Israel accountable for its human rights abuses.”

In 1948, at least 700,000 Palestinians became refugees and hundreds of thousands more were displaced from their homes and livelihoods by Jewish militias. Since then, Israel has been illegally colonizing the West Bank and East Jerusalem, further dispossessing Palestinians of their homes and land. The international community has repeatedly condemned Israel for its grave violations of Palestinian human rights, yet the Trudeau government almost never raises concerns about Israel’s crimes.