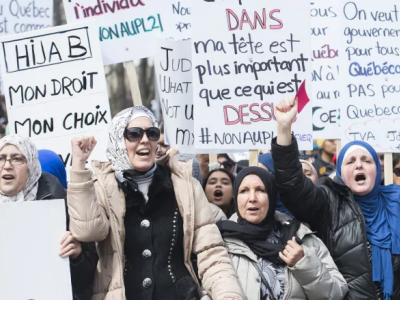 Montreal, August 27, 2019 — In advance of federal elections, Canadians for Justice and Peace in the Middle East (CJPME) urges Canada’s federal parties to take a position against Quebec’s law 21.  Entitled “An act respecting the laicity of the state,” the law bars public servants in positions of authority, including judges, police officers, and teachers from wearing religious symbols while on the job.  A secular organization, CJPME opposes the bill as an infringement on the rights of Canadians of Middle East origin, especially Muslim-Canadians.  The Canadian Charter of Rights and Freedoms prevents the government from passing laws which prevent or inhibit Canadians from practicing their religion.

As the Globe and Mail points out, Quebec Premier François Legault and his party have “knowingly trampled on religious freedom in Canada and are daring federal politicians to do or say something about it.”  The Federal parties silence is deafening – especially from the Liberals, NDP and Greens, which all claim to be socially progressive.  While polls in Quebec suggest that many Quebeckers support the new law, the law is a glaring example of “tyranny of the majority” – where the rights of Quebec’s religious minorities are sacrificed to the fears and prejudices of a majority.

“If no federal parties stand up against this law, they sacrifice core Canadian civil rights for the sake of the possibility of a few Parliamentary seats in Quebec,” asserted Thomas Woodley, president of CJPME. Given the timing of the law, CJPME and others conclude that the law targets Muslim Quebecers.  CJPME considers the “secularism” argument used by Legault to be spurious.  Other Canadians provinces are secular, yet they allow public employees to wear turbans, hijabs, kippahs and other religious garb on the job.  In fact, by allowing public employees to wear the religious garb of their conscience, the other provinces demonstrate their secularlism.

CJPME joins many organizations in opposition to the new bill.  A campaign called the “No to Law 21” was recently lanched in Quebec.  The campaign aims to have Quebeckers from all walks of life across the province wear a "No to Law 21" button and a religious symbol of choice through the month of September.  The campaign aims to reach 50,000 Quebeckers.  This campaign adds to other opposition to the law, including the English Montreal School Board, the City Council of Montreal, a Quebec teachers’ union, and others.