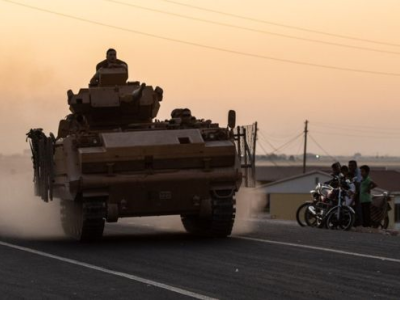 Montreal, October 11, 2019 — Canadians for Justice and Peace in the Middle East (CJPME) calls Canada to oppose the Turkish offensive in northern Syria, fearing that it will endanger civilians and reignite bloodshed.  Turkey launched the offensive following US President Trump’s decision to withdraw US soldiers from a border region of Syria.  A human rights organization, CJPME does not take political positions, but opposes actions that put civilians at risk, violate human rights, or enflame tensions.

“Each of the players in the region have their own interests, but Canada must insist that the players involved return to the negotiating table.  Armed violence reflects a total breakdown of diplomacy,” asserted Thomas Woodley, President of CJPME.  As both Canada and Turkey are NATO members, CJPME calls on Canada to pressure Turkey to de-escalate the offensive and try to resolve the situation diplomatically.  CJPME also calls Canada to take steps to protect civilians in the region.

American and Turkish officials had been working on a compromise agreement to protect the Turkey-Syria border, with the support of Kurdish authorities, but Turkish president Recep Tayyip Erdogan was apparently frustrated with the slow pace of the negotiations. Turkey is wary of an internal Kurdish insurgency, and Erdogan has said he views Kurds in Syria as terrorists threatening his country. The Kurds, for their part, are an ethnic minority spread between four countries: Turkey, Syria, Iraq and Iran.  In each country, they face discrimination, and struggle to assert greater control over their security and future.  Allied with the US in fighting ISIS, they were immediately endangered by Trump’s recent decision to withdraw US forces.

By the second day of the offensive, there were already reports that civilians are being forced to flee the region.  The International Rescue Committee has warned that the Turkish offensive could displace up to 300,000 people, not to mention the human rights violations and lawlessness that could result.  Many people in this part of Syria lack food, basic medical care and other necessities.  Another danger is that if Turkey’s offensive is successful, they could pressure the many Syrian refugees currently living in Turkey to return to Syria.  Not only would this endanger the refugees, but it would settle them in places in which most have no roots.