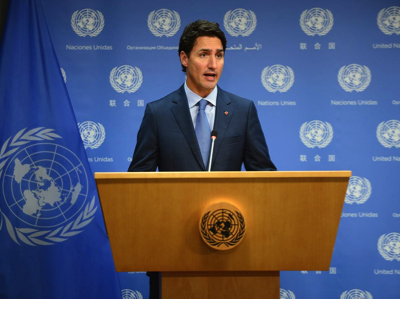 Montreal, October 28, 2019 — With several Palestinian-Canadian organizations, Canadians for Justice and Peace in the Middle East (CJPME) has signed a letter addressed to Prime Minister Justin Trudeau calling the new Liberal government to show leadership on human rights in Palestine-Israel.  In addition to CJPME, the letter is signed by 13 other Canadian civic organizations, most of them representing the Palestinian-Canadian community in various cities across Canada.  While congratulating Trudeau on his election win, the signatories to the letter call Trudeau to a higher human rights standard, enumerating six areas of need.

“There is much room for improvement,” asserts Thomas Woodley, President of CJPME.  “The Palestinian-Canadian community is wholly justified in addressing the Prime Minister and laying out their concerns.”  CJPME points out that, while the Trudeau government was far less pro-Israel than the Harper government, it still failed to find balance on a number of issues.  Most notably, Canada’s voting at the UN has hardly wavered from what it had been under the Harper government.  The letter addressed this issue in point #3, arguing that Canada’s UN voting record should be in greater “harmony with the majority of the international community based on the principles of fairness, justice and respect for international law and human rights for all.”

The letter called on the Trudeau government to be more consistent in its criticism of Israel’s human rights abuses.  In this regard, the letter called first for Canada to support independent inquiries into Israel’s human rights violations.  Next it called Canada to condemn Israel’s attempts to colonize the West Bank and East Jerusalem with “settlements,” citing UN Security Council resolution 2334 of December, 2016.  Finally, the letter called for Canada to recognize an independent Palestinian state, and to establish full diplomatic relations with the state of Palestine.