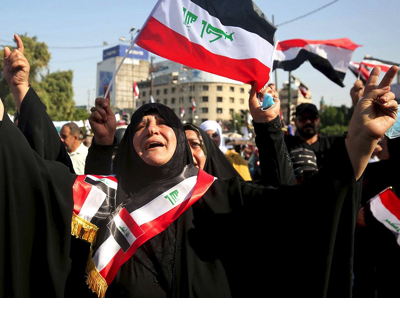 Montreal, November 19th, 2019 — Alongside fifteen Canadian civil society organizations, Canadians for Justice and Peace in the Middle East (CJPME) has signed a letter addressed to Prime Minister Justin Trudeau concerning the increasingly unstable human rights situation in Iraq. The letter calls on the incoming Liberal government to intervene to end the violence and human rights violations which have characterized the Iraqi government’s response to the popular protests in Iraq since October.

Over the past month, Iraqi civilians have demonstrated in major Iraqi cities including Baghdad, Karbala, Maysan and Basra to protest poverty and unemployment, lack of public services and widespread government corruption. Despite the peaceful nature of these popular protests, the Iraqi Security Forces and armed militias have responded with violence. Human rights organizations such as Human Rights Watch and Amnesty International have accused the Iraqi Security Forces of firing live ammunition, beating protestors and abducting and arresting activists – including bloggers and social media commentators. Since October 1st, over 319 protestors have been killed and at least 8,000 injured, according to the latest UN report. Amnesty International has aptly described the situation as a “bloodbath.”

CJPME notes that the Iraqi Security Forces’ excessive force and deliberate killings of unarmed protestors are not only a repression of free speech, but also constitute a grave violation of international law, which prohibits the targeting of civilians. CJPME Thomas Woodley responded, “We expect real human rights leadership from our Canadian politicians. This means condemning violence against civilians no matter where it occurs, including in Iraq, where the situation is already tenuous following decades of international intervention and war.”

The letter to the Prime Minister calls on the Trudeau government to take concrete steps to implement the recommendations from the United Nations Assistance Mission for Iraq (UNAMI)’s report on “Demonstrations in Iraq.” Namely, Canada must condemn Iraqi Security Forces’ abuses, support an independent investigation into the violence against Iraqi protestors, ensure the perpetrators are held accountable for their crimes, and implement measures to guard the Iraqi Right to Life and Right to Peaceful Assembly & Freedom of Expression.