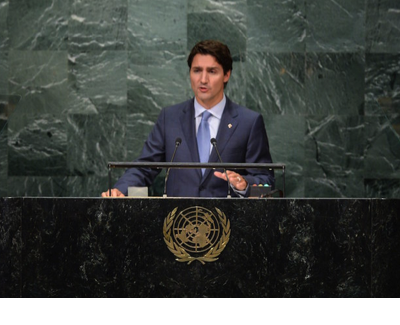 Montreal, November 20th, 2019 — Canadians for Justice and Peace in the Middle East (CJPME) thanks the Liberal government for yesterday’s vote in support of Palestinian self-determination at the United Nations General Assembly (UNGA). CJPME notes that yesterday marks the first time in nearly fifteen years that Canada has cast a vote in favour of Palestinian self-determination, breaking its pattern of voting against Palestinian human rights at the UN. CJPME calls on the Canadian government to apply a more balanced, consistent approach to its votes at the UN on Palestine-Israel, in accordance with international law and official Canadian foreign policy.

CJPME is pleased that Canada finally voted in favour of UNGA resolution A/C.3/74/L.58, which condemns Israel’s Apartheid Wall and ongoing occupation of the Palestinian territories, while stressing the need to “support and assist the Palestinian people in the early realization of their right to self-determination.” CJPME notes that is a long overdue step that is consistent with official Canadian foreign policy, which has long supported the two-state solution – a solution that by nature requires Palestinian self-determination and the creation of a Palestinian state. While CJPME is pleased with the outcome of this vote, CJPME is equally disappointed that late last week, Canada once again voted against several other resolutions relating to Palestinian human rights. Some of these resolutions included support for UNRWA, condemnations of Israeli human rights abuses, and condemnations of Israeli colonies (aka “settlements”), to name a few.

Given the timing of yesterday’s exceptional vote, CJPME can reasonably assume that this vote was the Trudeau government’s way of distancing itself from the Trump administration’s recent decree in support of Israel’s illegal colonies. CJPME Thomas Woodley responded, “Self-determination is a life and death issue for Palestinians and a fundamental right of all peoples, yet the Trudeau government seems to treat this issue lightly. They used Canada’s lone pro-justice vote as a way to send a message to the States rather than genuinely advocate for Palestinian human rights.” CJPME notes that the Prime Minister and Global Affairs has yet to publicly condemn Israel’s illegal colonies and has effectively evaded any pointed criticism of Trump’s decree. Moreover, a Global Affairs Canada official yesterday reaffirmed that Canada has "no current plans” to reverse its voting patterns at the UN on resolutions pertaining to Palestine-Israel.

Yesterday, CJPME joined over a dozen Palestinian-Canadian civil society organizations in signing a letter addressed to Prime Minister Justin Trudeau, thanking the Liberal government for their support for Palestinian self-determination at the UN. CJPME is hopeful that this vote will mark a shift toward more balance on the question of Israel-Palestine, but this awaits to be seen with the Trudeau government’s second mandate.