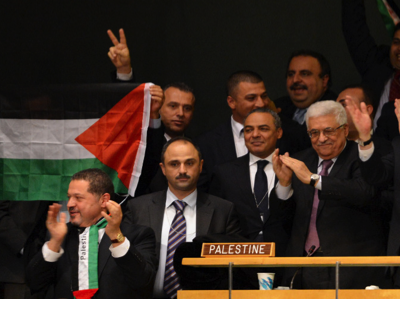 Montreal, November 27, 2019  — Canadians for Justice and Peace in the Middle East (CJPME) and other groups and individuals across Canada are demanding that the federal government strengthen its support of international law and human rights at the UN. Each year at the UN General Assembly (UNGA), about 15 resolutions relating to the Israeli occupation of the Palestinian territories are brought to vote. While Canada last week voted in support of Palestinian self-determination, it also voted against several other resolutions supporting Palestinian human rights and justice. Given the poor record of the Trudeau government, CJPME and others have launched campaigns to send the government a clear message that it cannot “cherry pick” violations of international law and human rights.

“Canada can no longer remain on the sidelines on these issues,” asserts Thomas Woodley, President of CJPME.  “These UN resolutions brought to vote at the UNGA align with Canada’s official position on the Israel-Palestine conflict.” CJPME points out that, over the past 10 years, Canada has opposed more than 100 UNGA resolutions condemning Israel’s human rights abuses against the Palestinian people. For example, the UNGA has repeatedly condemned Israel’s illegal colonies (a.k.a. “settlements”) in the West Bank in recent years, but this has fallen on deaf ears in Canada. While CJPME is heartened by Canada’s vote on Palestinian self-determination, this gesture is meaningless without other votes more broadly supporting the human rights of Palestinians.

The UN and several prominent human rights organizations, including Amnesty International and Human Rights Watch (HRW), frequently criticize Israel’s violations of international law and human rights vis-à-vis the Palestinians.  Earlier this year, Amnesty International published its report “Destination Occupation” highlighting many of the long-running human rights abuses perpetrated by Israel in its military occupation of the Palestinian territories. And this week, despite Israel’s expulsion of its country director for Israel/Palestine, HRW affirmed that it will continue to document Israel’s human rights abuses against Palestinians.  CJPME points out that Canada keeps good company when it calls out Israel’s human rights violations at the UN.

Additional votes related to the protection of Palestinian human rights are expected at the UNGA in the coming days. In response to Canada’s vote on Palestinian self-determination, pro-Israel lobby groups in Canada have sought to pressure the government to maintain its historic blind support for Israel. But CJPME calls on the Canadian government to heed the calls from Canadian civil society to improve its voting record in support of human rights at the UN.  “If Canada truly supports a two-state solution, with peace and security for both Palestinians and Israelis, it must challenge Israel’s ongoing human rights violations at the UN,” averred Woodley.