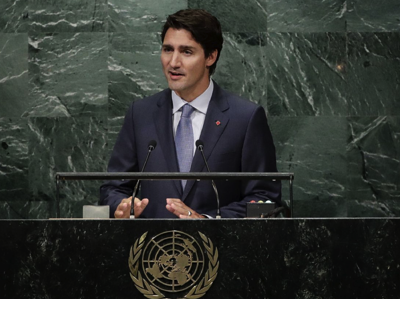 Montreal, December 6, 2019 — Canadians for Justice and Peace in the Middle East (CJPME) is deeply disappointed to see Canada revert back to anti-Palestinian voting pattern at the UN. Two weeks ago, Canada surprised the world when it broke its nearly fifteen-year anti-Palestinian voting pattern and supported a vote for Palestinian self-determination. Following the vote, Canadian media was abuzz with speculation that Canada would reverse other UN votes on Israel-Palestine. This week however, Canada once again voted against a series of resolutions affirming Palestinian human rights, signalling to the world that it will continue to vote in lockstep with Israel and the United States at the UN.

Each year, the UN General Assembly (UNGA) votes on about 15 resolutions in November-December that relate to Israel and Palestine.  When it provides an explanation for its anti-Palestinian votes, the Trudeau government suggests that the resolutions are “biased” or seek to “single out Israel.”  Yet the long list of votes is the result of the world’s frustration with Israel for refusing for decades to own up to, or redress its human rights abuses against Palestinians.  Some consider Canada’s votes a type of “diplomatic cover” for Israel, and Canada’s voting puts it in a very small minority at the UN.  For example, on the vote “Peaceful Settlement of the Question of Palestine,” Canada’s vote placed it in a losing minority of seven countries, including Israel, the US, the Marshall Islands, Micronesia, Nauru and Australia.  147 countries, including all of Canada’s European allies, voted in support of the resolution.

CJPME condemns this week’s unprincipled votes, which once again buck international law, contradict Canadian foreign policy on Israel-Palestine and suggest that Canada is opposed to working toward a fair and peaceful solution to the Israel-Palestine conflict. CJPME President Thomas Woodley responded, “While the Trudeau government claims to support a two-state solution and a peaceful resolution to the conflict, its pattern of voting at the UN actively devalues Palestinian human rights and undermines the Middle East negotiations process.”

Since his election in 2015, Justin Trudeau has followed the Harper government’s tradition of voting with Israel and the United States against resolutions supporting Palestinian human rights at the UN. While CJPME was cautiously optimistic about Canada’s vote in support of Palestinian self-determination at the UN two weeks ago, it is now clear that this vote was a meaningless one-off.  Some have suggested that Canada’s vote on Palestinian self-determination was either 1) to enhance its chances of winning a security council seat at the UN next year, or 2) to send a message to Secretary of State’s Mike Pompeo disapproving of his announcement that the US would no longer condemn Israel’s illegal “settlements” as violating international law.  Both of these possible explanations are unimpressive.  For years, with its UN voting, CJPME has recommended that Canada consistently support international law, and treat all countries equally.  Unfortunately, the Trudeau government has repeatedly ignored this simple and reasonable approach.

For more information, please contact Miranda, 438-380-5410
Canadians for Justice and Peace in the Middle East www.cjpme.org