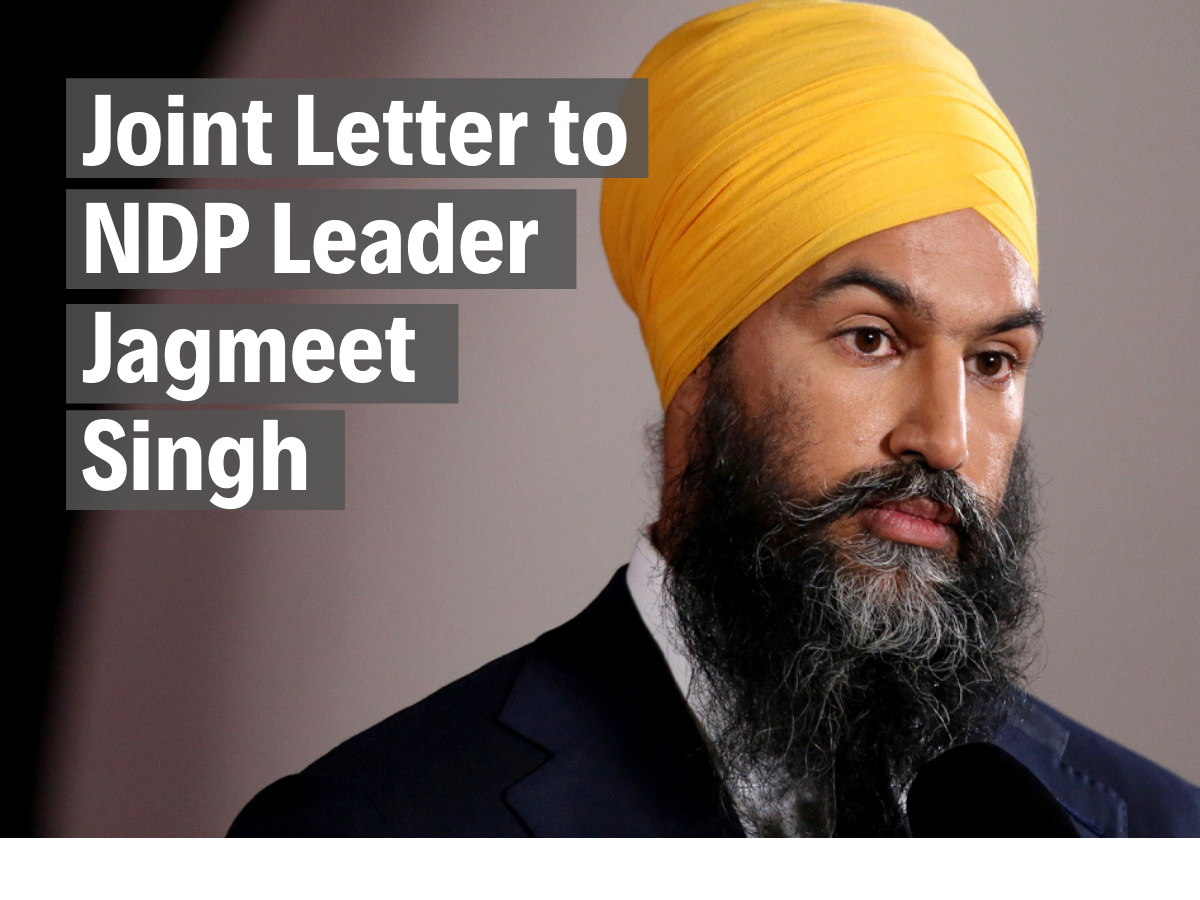 The following is a joint letter which was sent to NDP Leader Jagmeet Singh on January 6, 2021. The statement commends NDP MPs Charlie Angus and Leah Gazan for their statements criticizing Israel's discriminatory vaccine program and standing up for Palestinian human rights. It further requests that Singh adds his voice and stands against Israel's racist administration of vaccines. For CJPME's previous statement on this matter, click here.

On behalf of Canadians for Justice and Peace in the Middle East, and the other signatories on this letter, I write to commend the human rights concerns expressed by two New Democratic Party (NDP) Members of Parliament, Mr. Charlie Angus (Timmins-James Bay) and Ms. Leah Gazan (Winnipeg Centre). By bringing attention to the issue of Israel’s racially-discriminatory vaccination program Angus and Gazan follow in the NDP tradition of speaking out against racism and injustice at home and around the world.

It is regrettable, but like many other Israeli government practices and laws, Israel’s vaccine rollout of recent weeks has many hallmarks of a racially-biased system – a type of “vaccine apartheid.” In perhaps the most shocking example of this, Israeli citizens living in illegal West Bank settlements have access to Israel’s vaccination program, while neighboring Palestinians in the same territory have been excluded. As such, it is entirely appropriate that Mr. Angus used the term “apartheid state” in referring to Israel and its vaccination program. Ms. Gazan, citing the same reports, rightly accused Israel of “excluding people from being vaccinated based on discriminatory decisions and a clear violation of human rights.”

The comments of Angus and Gazan were based on journalistic reports about Israel’s vaccination program, which accurately presented the facts on the ground and the measured legal assessment of many human rights groups. As you consider Angus’ and Gazan’s comments, here are some things to bear in mind:

a) As the occupying power in East Jerusalem, the West Bank and Gaza, Israel has a legal obligation to ensure that all civilians of the territory it administers receive appropriate medical services. This obligation can and should be carried out in conjunction with the Palestinian Authority (PA). Article 56 of the Fourth Geneva Convention articulates this obligation stating:

“To the fullest extent of the means available to it, the Occupying Power has the duty of ensuring and maintaining, with the cooperation of national and local authorities, the medical and hospital establishments and services, public health and hygiene in the occupied territory, with particular reference to the adoption and application of the prophylactic and preventive measures necessary to combat the spread of contagious diseases and epidemics."

b) Some may suggest that the 1993 Oslo Accords somehow supersede the Fourth Geneva Convention, but they are wrong. Although the PA does have some limited authority under the Oslo accords, Article 47 of the Fourth Geneva Convention makes clear that Israel’s obligations as the occupying power are not undermined “by any agreement concluded between the authorities of the occupied territories and the Occupying Power.”

Even if Oslo did supersede international law – which it does not – proponents of Israel tend to cite or dismiss the Oslo Accords as it suits their arguments.  They are silent when Israel violates the Accords – e.g. when it expands illegal settlements, withholds tax transfers, etc. – but strident as it concerns the Palestinians’ responsibilities.  The Accords were shunted aside in 2001 when Israel began re-invading the West Bank and Gaza and remain in a state of limbo today.

d) Beyond Israel’s legal obligations toward the Palestinian civilians of the West Bank, Gaza and East Jerusalem, there are huge ethical and moral issues with the way Israel has conducted its vaccine rollout. In an interview with Democracy Now, Dr. Mustafa Barghouti of the Palestine Medical Relief Services made the following observations:

For these reasons, many civil society and human rights voices have been calling on Israel to fulfil its legal obligations and ensure that quality vaccines are provided to Palestinians under Israeli occupation. These voices include, but are not limited to:

Significantly, a statement released today by Amnesty International declared that “Israel’s COVID-19 vaccine programme highlights the institutionalized discrimination that defines the Israeli government’s policy towards Palestinians.” The statement continues, “Over half a century of occupation and enforcement of a system of institutionalized discrimination in the OPT, including East Jerusalem, Israel has deprived Palestinians of their basic rights and committed mass human rights violations. Israel must end its discriminatory policies and remove any barriers that may hinder Palestinians from accessing or enjoying health care.”

It is clear that the statements by Mr. Angus and Ms. Gazan are shared by a broad section of international civil society. And with such a scathing rebuke from Amnesty International, there can be no doubt that Israel’s vaccination accomplishments are sullied by its racist practices. There may be other countries that carry out racist practices in the distribution of vaccines, but Israel does it while claiming a place among liberal Western democracies. Israeli and Canadian officials talk of “shared values” between the two countries, and Israel enjoys a privileged trade agreement with Canada. Israel is answerable to the Fourth Geneva Convention because it is a signatory to the Convention.

Just as you, yourself and the NDP have decried Canada’s racist treatment of its Indigenous population, we call upon you to follow the lead of Angus and Gazan and make your own statement condemning Israel’s racist administration of vaccines. Our elected representatives have a duty to publicize and stand against racism and injustice, whether in Canada or elsewhere.

The signatories to this letter speak for, and to, grassroots Canadians of all backgrounds. We know that the principled statements by Mr. Angus and Ms. Gazan are aligned with the views of a strong majority of Canadians. Public opinion polls conducted by EKOS in 2017 and 2020 make clear that Canadians are uncomfortable with Israel’s ongoing human rights abuses, and that they do not want Israel to get a pass for its human rights violations. If the NDP leadership were to amplify their concerns, it would support international human rights, while aligning itself with the Canadian electorate.

Should you have any questions, you can reach us at 438-380-5410.  We will follow up with you to discuss this matter directly.