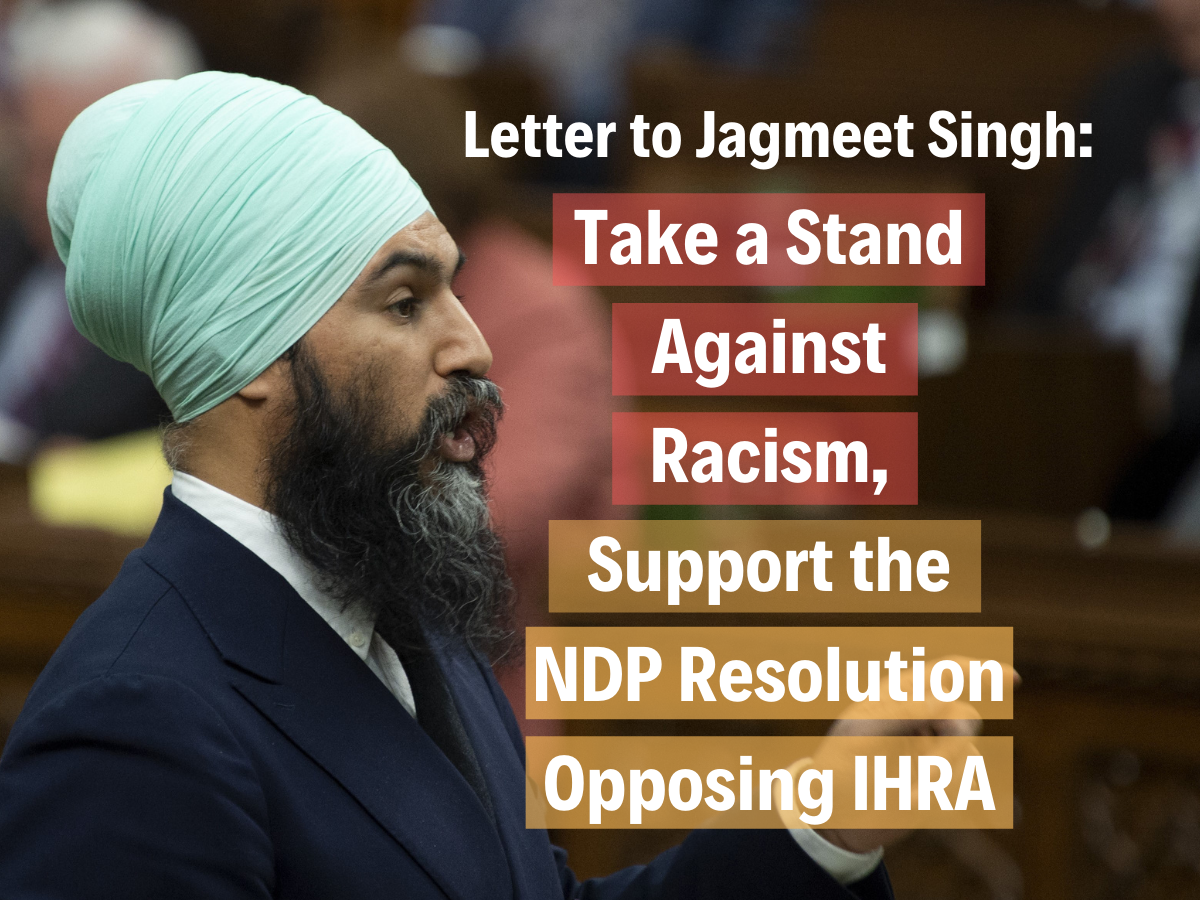 Below is a letter from CJPME to NDP leader Jagmeet Singh. It urges Singh to give his support to a resolution at the upcoming NDP convention which opposes the controversial IHRA definition of antisemitism. Click here to download a PDF of the letter.

On behalf of Canadians for Justice and Peace in the Middle East (CJPME), I urge you to allow a free and open debate on the International Holocaust Remembrance Alliance (IHRA) Working Definition of Antisemitism (WDA) at the upcoming NDP policy convention. A resolution opposing the IHRA WDA has been endorsed by over 50 riding associations, and we encourage you to support this resolution, and to support the right of your party members to engage in free political expression on topics of Israel, Zionism, and Palestine.

Antisemitism is a problem in Canada, and CJPME stands firmly opposed to it. Nevertheless, CJPME opposes the IHRA WDA, and particularly its illustrative examples, of which 7 out of 11 mention criticism of Israel or Zionism. Taken together, we and our supporters are concerned that the definition and its examples are already being used to stifle criticism and advocacy related to Israel and Palestine. Our concerns about IHRA are shared by Independent Jewish Voices Canada, the Canadian Labour Congress, the Canadian Federation of Students, the BC Civil Liberties Association, more than 550 academics, and many other civil society groups.[1]

CJPME believes that the IHRA WDA is far too ambiguous to be useful for determining instances of antisemitism. In many cases, its guidance is simply incompatible with principled advocacy on international affairs. This is a problem with several of IHRA’s “illustrative examples,” ostensibly intended to identify instances of antisemitism.  For example:

1) The IHRA WDA deems it antisemitic when someone is: “Applying double standards by requiring of [Israel] a behavior not expected or demanded of any other democratic nation.”[2] However, it should be obvious that a “double standard” is an incredibly imprecise, subjective standard by which to judge criticism. In fact, the complaint of a “double standard” will be used by any country which feels unfairly criticized. This aspect of IHRA opens the door to complaints against virtually any line of critique about Israel or its policies, and it is not clear who will be in a position to decide whether a “double standard” has been employed. The IHRA may be invoked in response to any occasion in which the NDP expresses reasonable criticism against the government of Israel over its policies towards the Palestinians.

2) The IHRA WDA deems it antisemitic when someone is “Denying the Jewish people their right to self-determination, e.g., by claiming that the existence of a State of Israel is a racist endeavor.”[3] This aspect of IHRA directly targets criticism which makes claims about the racist character of Israel. This potentially poses a problem for anyone looking at Israel from the perspective of its discriminatory actions and policies targeting Palestinians. It would be akin to forbidding someone from calling Canada a “racist” state, or from talking about Canada in terms of its history of anti-Indigenous discrimination or systemic racism.

This threat is not simply a hypothetical matter, as many of IHRA’s Canadian supporters see the definition as a tool to ban or defund certain forms of criticism and protest of Israel, and they are already using it to attack government and international initiatives which criticize or discipline Israel. Below are just a few examples:

First, IHRA has been used to target MPs who criticize Israeli policies:

Second, the IHRA has been used to criticize Canada’s vote for Palestinian self-determination at the United Nations:

Third, IHRA has been leveraged to target and defund humanitarian NGOs who partner with Palestinian organizations:

Fourth, IHRA has been used to condemn the International Criminal Court (ICC):

Fifth, IHRA is being promoted as a way to allow universities to crack down against scholarship and campus activism that is critical of Israel:

The above examples are only a small sample of the concrete ways in which IHRA’s key supporters intend to use it against specific forms of government policy, advocacy, research, and charity. Many of the positions being accused of violating the IHRA WDA have been recently supported by the NDP, including support for votes at the UN and the ICC investigation of Israeli officials.

If IHRA were to be adopted by the NDP, CJPME fears that it would be used to shut down free expression for anyone who would advocate for Palestinian human rights or criticize Israel’s human rights violations, whether NDP members in Parliament promoting a change in government policy, or party members organizing in their community. Even if it were not always weaponized against such activities, IHRA would not only put a chill on free expression, but would also likely result in self-censorship around these issues.

In 2019, the NDP admitted that IHRA “could be a threat for people who legitimately denounce grave human rights abuses by the government of Israel against Palestinians.”[13] We urge you to build upon this principled stance and to publicly give your support to the upcoming resolution. The NDP can combat antisemitism without undermining the ability of Canadian Palestinians to advocate for themselves, and without undermining the NDP’s ability to combat racism in Canada or internationally.

For more analysis, please see CJPME’s brief on Bill 168, [14] as well as the detailed report from Independent Jewish Voices Canada (IJV Canada).[15] IJV has also compiled a list of more than 30 examples of IHRA having been weaponized to silence criticism of Israel.[16]

Please do not hesitate to contact me if you have further questions or concerns. You can reach me at 613-315-7947, or at [email protected]

Vice President, Canadians for Justice and Peace in the Middle East

They accuse you correctly. You're promoting antisemitism. Time for you to review the IHRA definition of antisemitism adopted federally in Canada. Would probably also be smart on your behalf to call @IrwinCotler and get a short refresher on what antisemitism is as well.

Canada adopting @TheIHRA definition of #Antisemitism is an important symbolic and declaratory move. Implementing it in the Canadian policy, including NGO funding used to single out and attack Israel, is essential. https://t.co/JLT3hNPKPB https://t.co/35o2njqvDd

[10] Michael Mostyn, “Mostyn: U of T was right to rescind but wrong to offer controversial appointment,” Toronto Sun, September 24, 2020, https://torontosun.com/opinion/columnists/mostyn-u-of-t-was-right-to-rescind-butwrong-to-offer-controversial-appointment

[15] IJV Canada, “How Not to Fight Antisemitism: A Critique of the International Holocaust Remembrance Alliance Working Definition of Antisemitism (IHRA-WDA),” May 2019, https://www.ijvcanada.org/how-not-to-fight-antisemitism-ihra-wda-report/