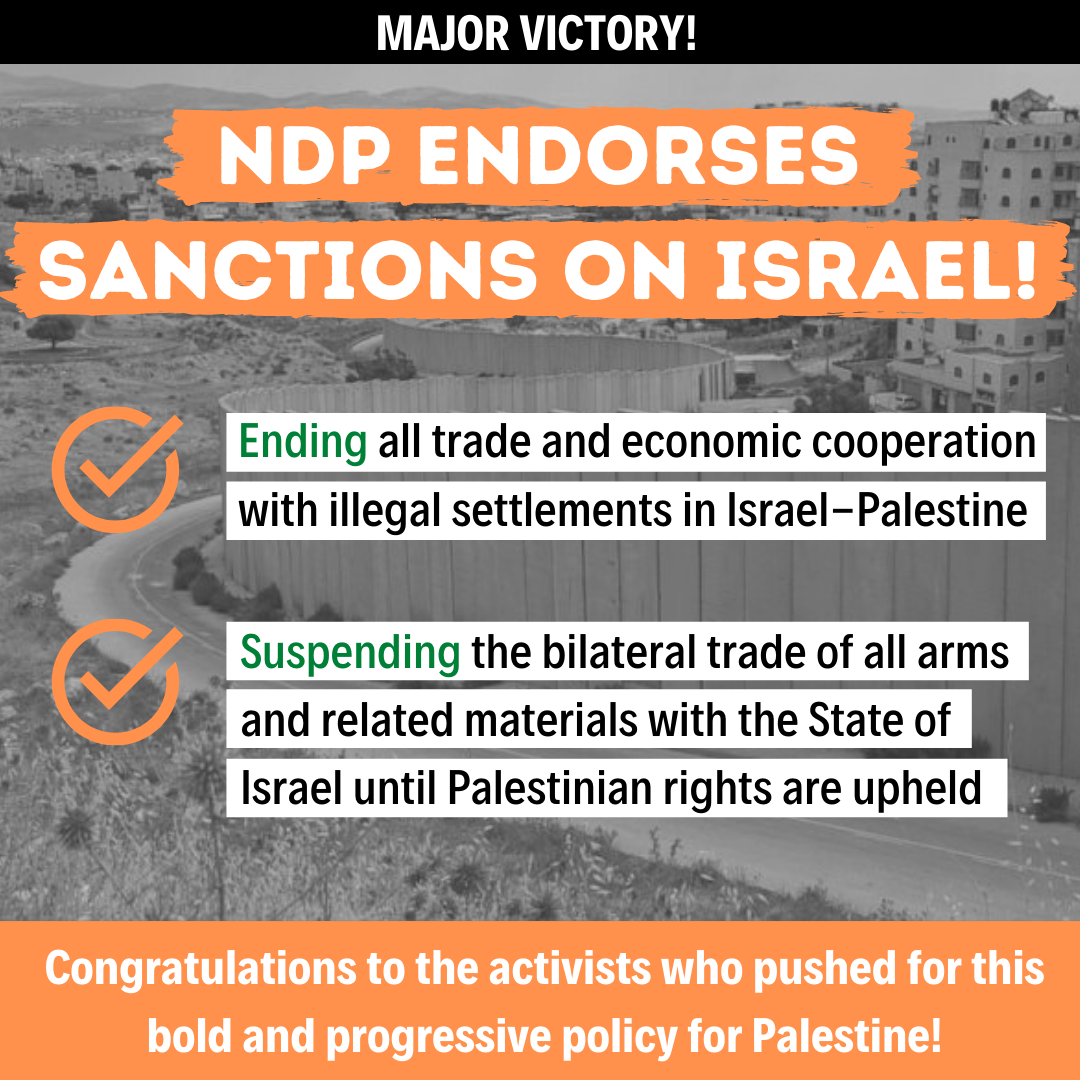 Montreal, April 10, 2021  — Canadians for Justice and Peace in the Middle East (CJPME) applauds the New Democratic Party of Canada (NDP) for adopting a bold new policy in support of sanctions against Israel. This evening at the NDP policy convention, party members passed a popular, grassroots resolution in support of a ban on trade with illegal Israeli settlements and an arms embargo on the State of Israel. This vote is a major win for party activists, including Palestinian and Jewish members, who have organized for years to get the NDP take action to support Palestinian human rights. A statement from the main organizers behind the resolution can be found here.

“For the first time, the NDP has endorsed concrete and proactive measures that the Canadian government can take to force Israel’s compliance with international law,” said Michael Bueckert, VP CJPME. “This is a major step forward for the NDP, and an encouraging development for all Canadians who want to see our political leaders respond to the call for action coming from Palestinian civil society,” added Bueckert. CJPME notes that the Green Party of Canada adopted a motion with similar measures in 2016, including a ban on importing settlement goods and the termination of military cooperation with Israel.

At the same time, CJPME expresses disappointment that a resolution to oppose the controversial IHRA definition of antisemitism never came to a vote. This is despite the fact that the resolution was endorsed by dozens of riding associations (more than any other policy) and highly prioritized by members who put it in 6th place out of 48 foreign policy resolutions. Earlier this year, CJPME sent a letter to Jagmeet Singh expressing serious concerns about IHRA -- including how it is weaponized to target critics of Israeli human rights abuses -- and urged Singh to allow for a free and open debate on this issue. “Even though there was no vote on this resolution, the NDP leadership needs to realize that there is widespread and growing opposition to the harmful IHRA definition within the party, who expect their leadership to take a clear stance against it” said Bueckert.

According to the NDP’s new Israel sanctions policy, New Democrats believe in “ending all trade and economic cooperation with illegal settlements in Israel-Palestine,” and “suspending the bilateral trade of all arms and related materials with the State of Israel until Palestinian rights are upheld.” The resolution was endorsed by thirty-three riding associations, the party’s young wing, and several NDP MPs. There was a similar grassroots initiative to adopt a ban on settlement goods at the previous NDP convention in 2018, but it was blocked from coming to the floor for a vote.