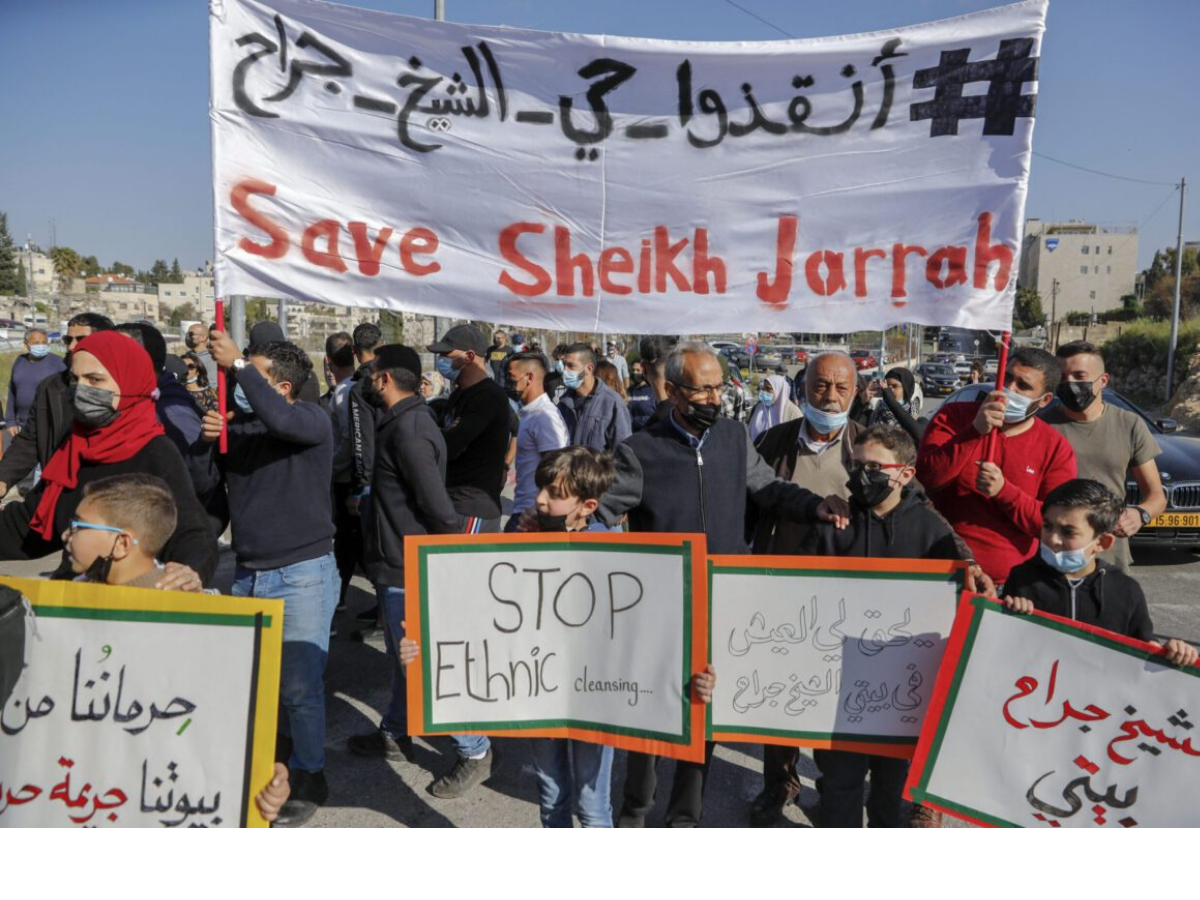 On April 15, 2021, CJPME joined the Palestinian Canadian Academics and Artists Network (PCAAN) and other civil society groups in sending a joint letter to Marc Garneau, the Minister of Foreign Affairs, which urged him to take action to prevent the eviction of Palestinians from their homes in Sheikh Jarrah, illegally occupied East Jerusalem. Click here to download the letter, which is also copied below.

We write to you about an urgent matter. We have been informed that the Israeli occupying power is in the process of confiscating Palestinian homes located in the East Jerusalem neighborhood of Sheikh Jarrah.

Today, hundreds of Palestinians from neighborhoods in East Jerusalem, including Sheikh Jarrah, are facing the imminent threat of forcible transfer, illegal under the Rome Statute of the International Criminal Court and the Fourth Geneva Convention. A significant number of children are among those threatened with homelessness.

Recently, an Israeli civilian court, which under international law has no jurisdiction in East Jerusalem, ruled in favor of Jewish settlers and has given 4 families in the Sheikh Jarrah neighborhood until May 2, 2021 to vacate their homes. Three other families were ordered to leave by August 1st. There is also a looming threat of dozens of home demolitions in the East Jerusalem neighborhood of Silwan.

In 1948, the El-Kurd family were dispossessed of their land and homes in Haifa by the newly formed state of Israel. With many other families, they had moved into the Sheikh Jarrah district of East Jerusalem as part of a 1956 UNRWA agreement in which UNRWA provided the housing of 28 Palestinian refugee families who were displaced in 1948, without prejudice to the families’ right to return to the original homes, villages and towns from which they were displaced. According to the agreement, each family was allotted a house and a plot of land in the Karm al-Jaouni area of Sheikh Jarrah.

To cement the Palestinian dispossession and displacement in East Jerusalem, Israel enacted the Legal and Administrative Matters Law in 1970, which facilitates the transfer of Palestinian property in the occupied Palestinian territory (OPT) to Jewish settlers. According to the Legal Center for Arab Minority Rights in Israel (Adalah), there are over 65 Israeli laws – applied by the occupying power in both the OPT and Israel – that discriminate against Palestinian Arabs on the basis of their nationality.

As an occupying power, Israel is prohibited from transferring its own civilian population into the territory it occupies. Such practices constitute war crimes and crimes against humanity under international humanitarian law and international criminal law.  They are, however, facilitated by Israeli courts which have ruled in favour of lawsuits undertaken by settler organisations to forcibly evict many Palestinian families.  Settler groups, using false and spurious claims, are implementing a creeping takeover of Palestinian dwellings, and openly plan to forcibly transfer more families who have lived in the neighborhood for generations. Outrageously, those Palestinian families are then ordered to pay the courts to cover the legal costs of the settler organisations.

The United Nations (UN) Security Council has repeatedly affirmed that East Jerusalem is occupied territory and that Israeli civilian courts do not, thereby, possess any jurisdiction in that part of the city. Thus, resolution 476 (1980) affirms that “all legislative and administrative measures and actions taken by Israel, the occupying Power, which purport to alter the character and status of the Holy City of Jerusalem have no legal validity and constitute a flagrant violation of the Fourth Geneva Convention,” and that “all such measures which have altered the geographic, demographic and historical character and status of the Holy City of Jerusalem are null and void and must be rescinded in compliance with the relevant resolutions of the Security Council.” These affirmations are in keeping with the erga omnes obligations of all states, including Canada, to ensure respect for the Fourth Geneva Convention (art. 1) in the whole of the OPT, including East Jerusalem, and to respect and bring to fruition the Palestinian people’s right to self-determination in whole of that territory in accordance with international law. To this end, Security Council resolution 2334 (2016) called “upon all States” including Canada, “to distinguish, in their relevant dealings, between the territory of the State of Israel and the territories occupied since 1967.”

Minister Garneau, it is in light of the clear requirements of international law as affirmed by the UN Security Council that Canada “does not recognize Israel's unilateral annexation of East Jerusalem,” “recognizes the Palestinian right to self-determination,” and “supports the creation of a sovereign, independent, viable, democratic and territorially contiguous Palestinian state.” Therefore, if Canada’s commitment to its obligations under international law and its own stated policy are to be given effect, we call upon the Canadian government to immediately:

Catholics for Justice and Peace in the Holy Land

United Network for Justice and Peace in Palestine-Israel