Letter to TDSB on pattern of anti-Palestinian discrimination 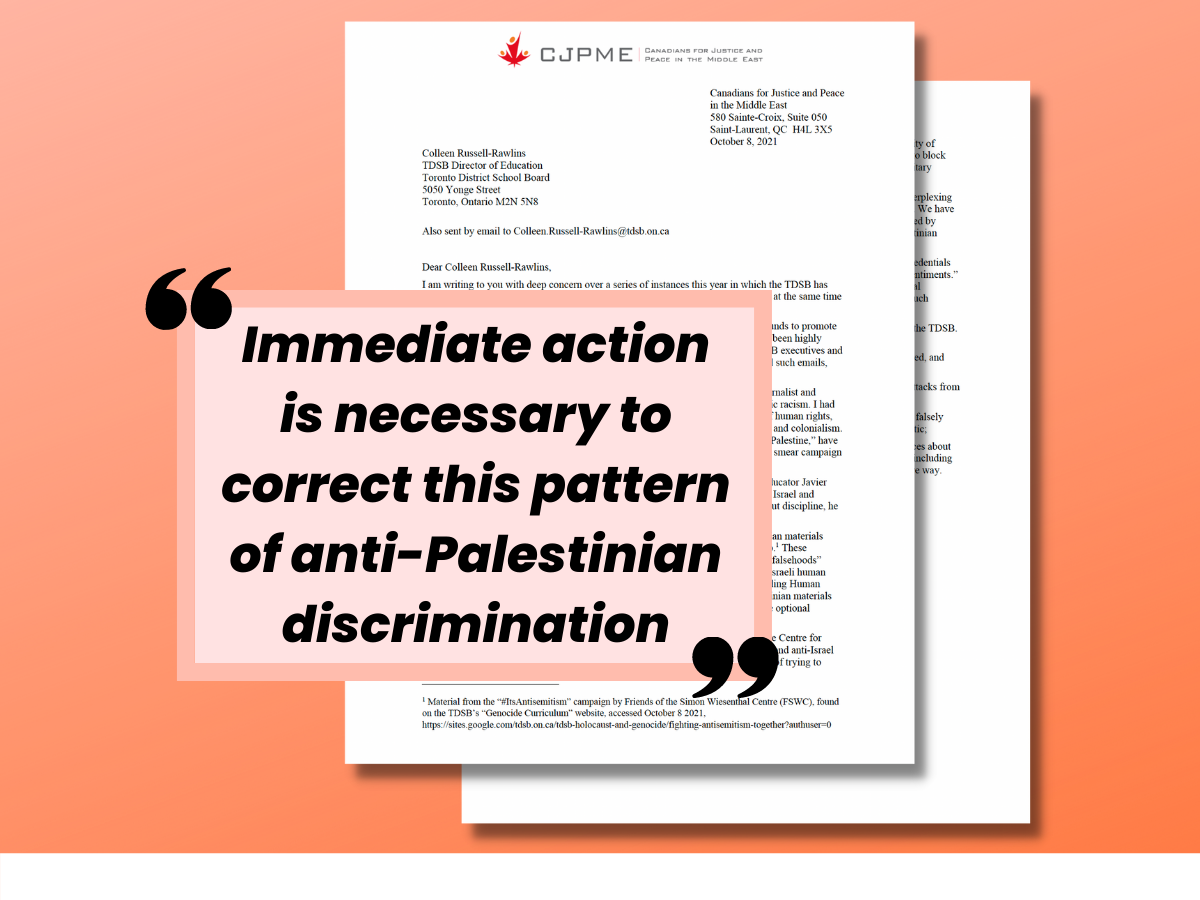 Montreal, October 8, 2021  — Below is a letter from CJPME to the Toronto District School Board (TDSB). The letter raises concerns over how supporters of Palestinian rights have been mistreated by the TDSB, while pro-Israel lobby groups have been given an opportunity to shape curriculum. Click here to download a PDF of the letter.

I am writing to you with deep concern over a series of instances this year in which the TDSB has reprimanded or disavowed voices who spoke about Palestinian human rights, while at the same time giving pro-Israel lobby groups a wide opportunity to shape TDSB curriculum.

As president of an organization which works to empower Canadians of all backgrounds to promote justice, development and peace in the Middle East, the TDSB’s recent actions have been highly troubling.  Given our concern, we have asked many of our supporters to email TDSB executives and supporters – including yourself – over the past few days. We hope you have noticed such emails, and are prepared to consider our concerns seriously.

First, we are disappointed that you saw fit to apologize for causing “harm” after journalist and activist Desmond Cole spoke about Palestinian rights during an event about systemic racism. I had the opportunity to view part of his speech, and found it to be an eloquent defence of human rights, as he connected the struggles that Palestinians face to the broader context of racism and colonialism. I am appalled by how Cole’s remarks, including his use of the simple phrase “Free Palestine,” have been mischaracterized as hatred, and how the board’s actions have given fuel to the smear campaign against him.

Second, we’re concerned by how the TDSB has failed to support anti-oppression educator Javier Davila, who continues to face similar attacks for sharing legitimate resources about Israel and Palestine to an opt-in list serve. While we are glad that he has been reinstated without discipline, he never should have been under investigation in the first place.

At the same time, we noticed that the TDSB website hosts/reproduces anti-Palestinian materials from the Friends of the Simon Wiesenthal Centre (FSWC), a pro-Israel lobby group.[1] These materials claim that the language of “apartheid” and “colonialism” are “antisemitic falsehoods” when applied to the case of Israel, despite such concepts being commonly used by Israeli human rights groups, academic scholars, and mainstream international organizations including Human Rights Watch. It is outrageous that this lobby group’s inflammatory and anti-Palestinian materials are being provided to teachers as curriculum, while educators like Davila who share optional resources have been subject to investigation.

Similarly, we were alarmed to read that TDSB intends to hire a staff person from the Centre for Israel and Jewish Affairs (CIJA) to design classroom resources on “anti-Palestinian and anti-Israel sentiments.” CIJA is a prominent pro-Israel lobby group with a documented history of trying to silence academic critics of Israel, including in the recent “Azarova Affair” at the University of Toronto. In that case, CIJA intervened in a confidential hiring process with the intention to block the appointment of Dr. Azarova, based on her scholarship which is critical of Israel’s military occupation of Palestinian lands.

Given CIJA’s recent role in suppressing academic freedom on Israel and Palestine, it is perplexing that TDSB would seek their assistance in the design of educational materials on the issue. We have no confidence that such resources would acknowledge the real racism and oppression faced by Palestinians, and CIJA’s involvement would likely lead to the further censorship of Palestinian perspectives.

We would encourage the TDSB to engage secular education professionals with proven credentials for assistance in designing any classroom resources on “anti-Palestinian and anti-Israel sentiments.”  Most importantly, as compared to the TDSB’s publicized proposal, Palestinian educational professionals should be central to such sessions. We would be happy to suggest a list of such qualified individuals should you request it.

Immediate action is necessary to correct this pattern of anti-Palestinian discrimination in the TDSB. I ask of you the following:

I thank you for your prompt action on these items.

[1] Material from the “#ItsAntisemitism” campaign by Friends of the Simon Wiesenthal Centre (FSWC), found on the TDSB’s “Genocide Curriculum” website, accessed October 8 2021, https://sites.google.com/tdsb.on.ca/tdsb-holocaust-and-genocide/fighting-antisemitism-together?authuser=0