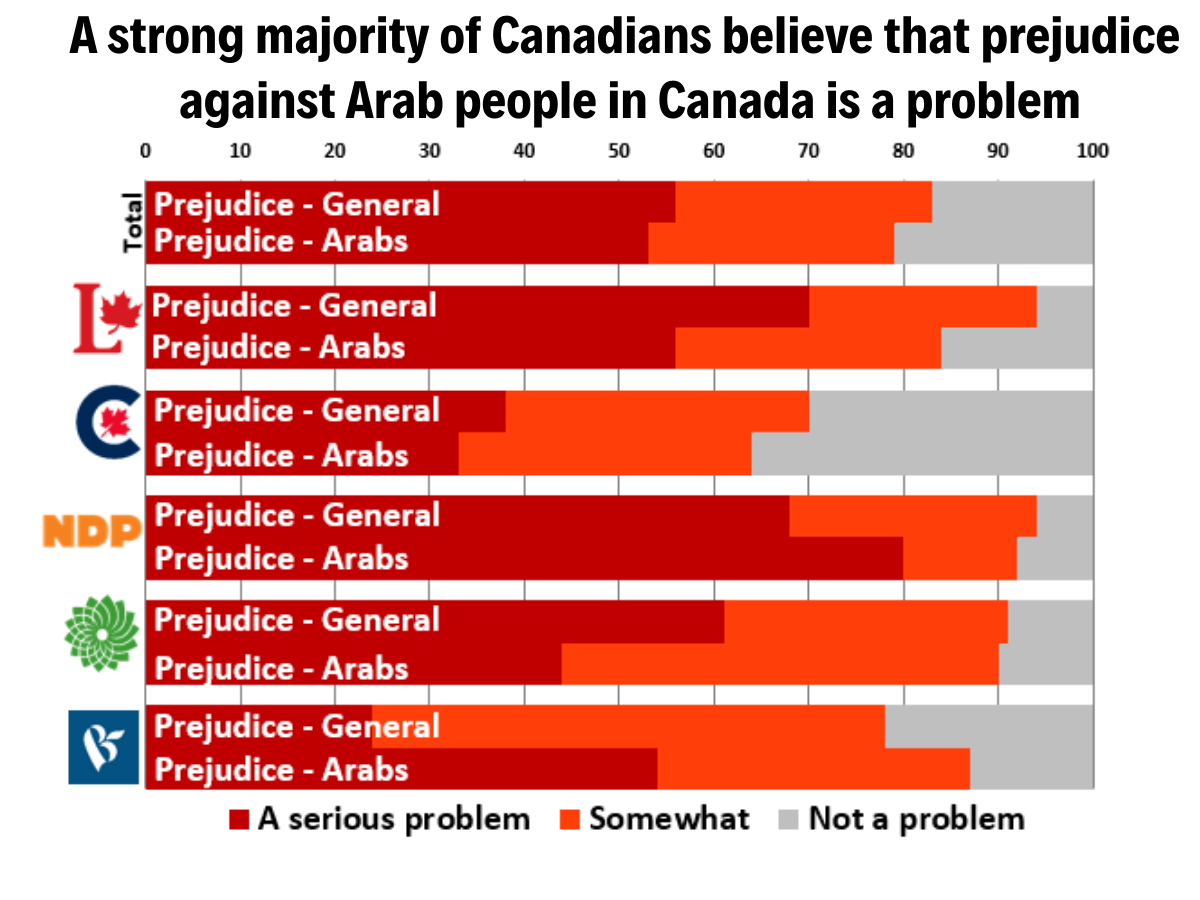 Montreal, October 28, 2021  — A survey of Canadian opinion conducted by EKOS Research Associates reveals a disturbing problem of racist attitudes toward Arabs in Canada. The survey found that Canadians hold more negative views towards immigration from Arab countries, compared to immigration in general, and that Canadians hold negative stereotypes about Arabs and Arab society. At the same time, the survey shows that Canadians acknowledge anti-Arab racism to be a problem, are generally opposed to racial profiling of Arabs, and recognize that various barriers can negatively affect the ability of Arab-Canadians to secure employment. Finally, the survey results show that Canadians hold Arabs less responsible than Israel for prolonging the “Arab-Israeli conflict,” and support proactive measures to hold Israel accountable.

The survey was co-sponsored by Canadians for Justice and Peace in the Middle East (CJPME), the Canadian Arab Federation (CAF), and the Arab Canadian Lawyers Association (ACLA). All survey results, charts, and the report entitled “Marginalized and Misunderstood: Survey on Attitudes on Arabs and Anti-Arab Racism in Canada” can be accessed at http://www.cjpme.org/survey2021.

The results show that Canadians are 10% more opposed to immigration from Arab countries than immigration in general. Overall, 38% of Canadians say that there are too many Arab immigrants, but among Conservative Party supporters this number jumps to 68%. The survey also reveals that Canadians tend to view Arabs much more negatively than people of other backgrounds, consistently rating Arabs lower on positive stereotypes (such as “tolerant” and “adaptable”) and higher on negative stereotypes (such as “violent” and “fanatic”).

“While not surprising, it is deeply disturbing to see this evidence of consistently negative attitudes towards Arabs among the Canadian public,” said Thomas Woodley, President of CJPME. “This clearly demonstrates that anti-Arab racism continues to be a widespread and systemic problem in Canada, despite receiving almost no attention or public resources to address it.”

At the same time, the survey shows that 79% of Canadians acknowledge prejudice against Arabs to be a problem. “If there’s any encouraging news in these results, it is that many Canadians recognize that anti-Arab racism exists in Canadian society,” said ACLA President Dania Majid. “This should be a catalyst for better government initiatives to counter discrimination and racial profiling, and to address the gaps that Arab-Canadians face when it comes to unemployment and other poorer socio-economic outcomes.”

The survey’s findings on Arab-Canadians’ challenges in the employment market were particularly striking. When asked about why Arab-Canadians face a joblessness rate 50% higher than the average, 92% of Canadians suggested that difficulty speaking one of Canada’s official languages could have a negative effect. Additionally, 84% said that lack of Canadian job experience was another important factor, followed by (81%) not having a Canadian educational background. Canadians felt that “difficulty in fitting in,” (78%), “having a strong Arabic accent” (73%) and “having a name that sounds Arab,” (64%) could also all have a negative effect on an Arab-Canadian’s job prospects.

“Despite being among the most well-educated of Canadian minorities, Arab-Canadians continue to suffer chronic, disproportionate unemployment and underemployment.” said Atif Kubursi, Chair of the Board of Trustees for CAF. “Once and for all, the federal government must implement policies that eliminate the barriers that Arab-Canadians face in terms of accessing services and employment. This is not only fair it is also good for the Canadian economy and society.”

The survey was conducted by EKOS Research Associates between May 26 and May 31, 2021, with a random sample of 1,005 Canadian adults aged 18 and over. The margin of error associated with the sample is plus or minus 3.0 percentage points, 19 times out of 20.

Dr. Atif Kubursi, Chair of the Board of Trustees, CAF, [email protected]