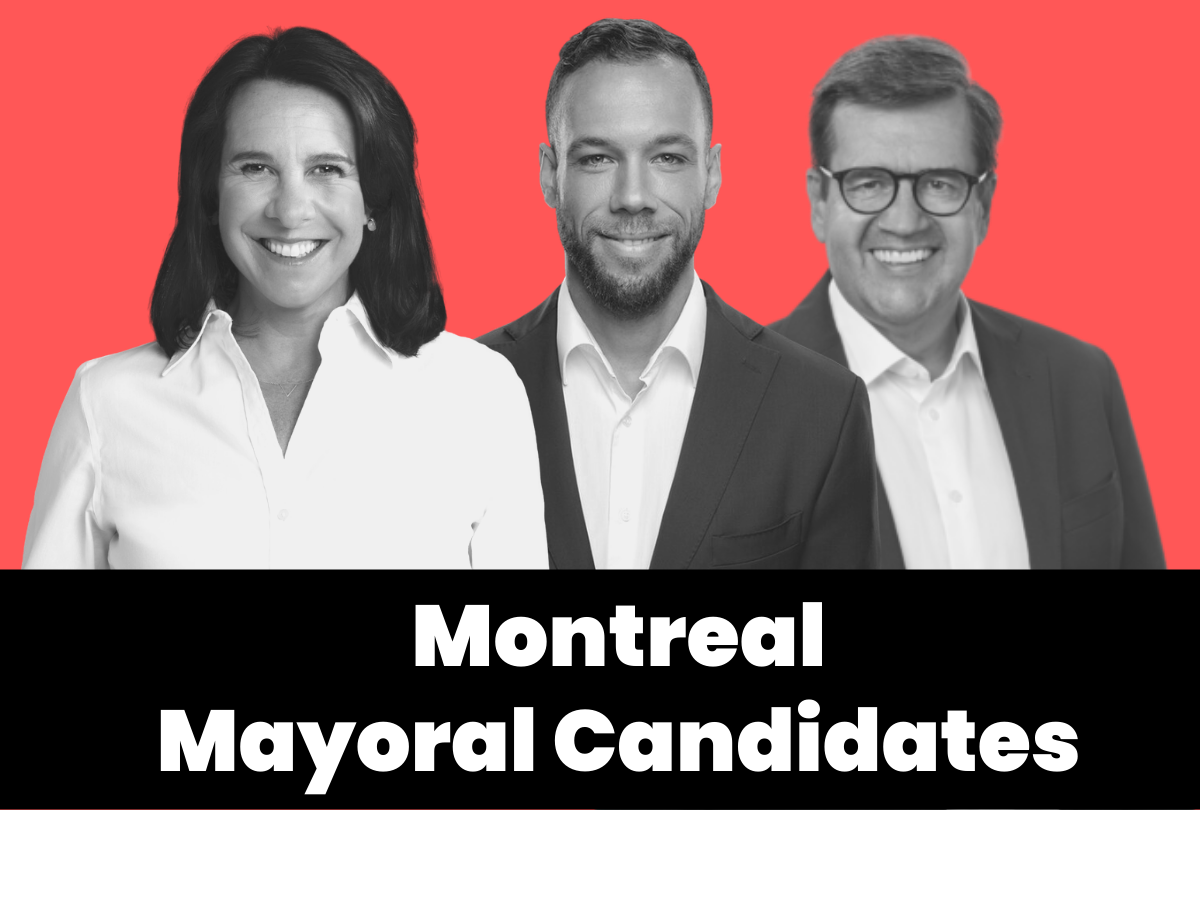 The vote is Saturday and Sunday, Nov. 6 and 7. Running for control of City Hall are:

In response to a five-point questionnaire, CJPME received detailed written responses from Valérie Plante’s Projet Montréal. CJPME also had the opportunity to speak to Mr. Holness over the phone to get Mouvement Montréal’s response. Unfortunately, Denis Coderre’s Ensemble Montréal did not provide any form of response to our questionnaire.

CJPME is non-partisan and is not endorsing any party in the election. However, we are providing our Montreal-area supporters with information on where the candidates stand, so that you can make an informed choice on November 6 and 7.

Projet Montréal: Projet Montréal did not provide a statement on IHRA, but agreed with the importance of combatting antisemitism and all forms of racism and discrimination with concrete action. CJPME notes that in January 2020 Projet Montréal declined to adopt IHRA, preferring further study towards a Montreal-specific approach.

Mouvement Montréal: Mr. Holness said that he doesn’t know enough about IHRA, and therefore could not provide a position. However, he agreed to commit to learning more and hearing from community groups about the issue. He also suggested that one of the reasons that the IHRA definition is so controversial is because it is an international definition without consultation, rather than based on local priorities, and so it doesn’t specifically speak to the experiences of everyone in Montreal. He suggests that Montrealers can come together to create our own unique approach.

Point 2: CJPME asked the parties whether they support Montréal’s historic approach to secularism and religious diversity – one of open secularism and neutrality – or whether they feel that discriminatory measures like Law 21 are required to ensure a secular society?

Projet Montréal: Projet Montréal did not specifically mention Law 21 in its response. However, Projet Montréal says it believes that all levels of government must work to eliminate any obstacles that would prevent all citizens from full, complete, and fair participation. They also committed to ensuring harmonious intercultural relations in Montreal, describing the city as both a French-speaking and a cosmopolitan metropolis.

Point 3: CJPME made reference to the January 29, 2017 Quebec City Mosque Shooting, and asked what the parties would do to combat all forms of racism, hate and religious discrimination, especially Islamophobia?

Mouvement Montréal: Mr. Holness pointed to the role of his organization, Montreal in Action, in pushing the city to conduct public consultations, which resulted in the OCPM report on systemic racism and discrimination. Mr. Holness specifically pointed to recommendation 24 of that report, which would improve the police’s reporting of hate crimes, as a priority for him. Mr. Holness said that in addition to education on religious discrimination, his administration would provide additional security in and around mosques and other places of worship. Mr. Holness added that commemorations of January 29 are “critically important,” requiring official commemoration in order to demonstrate that the city at the highest levels is committed to rebuilding trust between government and communities.

Projet Montréal: Projet Montréal affirmed that too many fellow citizens of Arab origin and/or Muslim faith still face threats, intimidation and violence because of religious identity or affiliation. Projet Montréal noted City Council’s recognition of the existence of racism and systemic discrimination, and committed to denouncing hatred and implementing concrete actions to address it. Projet Montréal also noted its role in the creation of the Office of the Commissioner for Combating Racism and Systemic Discrimination, which is working on implementing a series of recommendations from the OCPM report, including improving action on hate crimes.

Mouvement Montréal: Mr. Holness agrees that anti-Arab racism is a broad systemic issue that must be addressed. He provided a list of four concrete things that Mouvement Montréal could do: 1) have the city adopt a policy of anonymous resumes, so that nobody in human resources will be able to discriminate against an individual applicant based on their name; 2) invest in public education which allows students to get to understand and value different cultures, and dispel the ‘mythical norm’ of what it means to be Quebecer; 3) support entrepreneurs from minority communities, in terms of training, support, and mentorship; 4) better urban planning for low income neighborhoods which are disproportionately represented by minorities including the Arab population, in terms of adequate funding for leisure, sports, recreation, infrastructure, and green spaces.

Point 5: Like other thriving cities, Montreal is often invited to develop special relationships and links with other cities and countries to share best practices and promote cooperation.  CJPME highlighted the potential ethical issues with such partnerships, and asked what steps each party would take to ensure that Montréal does not establish relationships with jurisdictions accused of human rights or other abuses?

Projet Montréal: Projet Montréal says that before entering into bilateral relationships with other cities around the world, they would first ensure that those cities respect human rights. Projet Montréal adds that the city’s municipal council has spoken out in recent years when human rights situations need to be addressed – including the example of the treatment of Rohingyas in Myanmar - and that it will have the courage to continue to do so in the future.

Mouvement Montréal: Mr. Holness objected to the idea of conditioning city-to-city relationships on respect for human rights. He noted that Montreal has its own human rights abuses and practices, including Law 21 and anti-Arab racism, and therefore says that Montreal is in no position to lecture other cities. Instead, he says that Montreal needs to take an approach of “diplomacy,” engaging in collaboration and exchange without “excluding or marginalizing.”

All information regarding voting can be found at the Elections Montreal Website.